Pressure on ARIA to juggle risk in the pursuit of breakthroughs

To elicit the most impact from science spending, the new UK funder will need to experiment judiciously 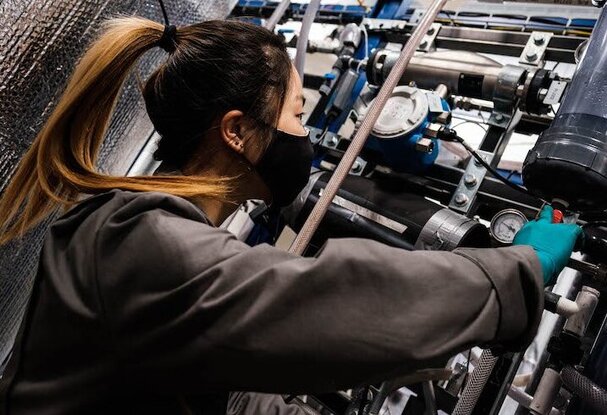 A member of CERT, a multidisciplinary team of researchers from chemistry, materials science and engineering based at the University of Toronto, works with technology that converts CO2 emissions into fuels and chemical feedstocks. In December 2020, CERT was announced as a finalist in the Carbon XPRIZE, run by US-based non-profit organization, the XPRIZE Foundation.

The Canadian research agency CIFAR claims credit for rekindling research in artificial neural networks, a subfield of artificial intelligence (AI), through its decision in 2004 to award unrestricted fellowships of US$30,000 a year to talented researchers.

This funding, which is renewable every five years, was later supplemented by funding from the Natural Sciences and Engineering Research Council of Canada.

The ongoing programme was pivotal to the development of deep learning, an AI function that imitates how the human brain processes data and creates patterns, according to Alan Bernstein, CIFAR president and chief executive officer.

Such success was not forecast: the programme started during a period that research in the area languished. “All the major funding agencies in the US, Canada and the UK cut back their funding for AI research [in the 1970s and 1980s],” says Bernstein. “Universities were reluctant to hire anyone in the area, and industry walked away.”

This is the kind of high-risk, high-reward story that the UK’s newest funding body, the Advanced Research and Innovation Agency (ARIA), might like to relate in a decade or two. The agency, backed by £800 million as part of the UK government’s July 2020 R&D roadmap for spending £14.6 billion in 2021-22, is tasked with stimulating research that leads to transformative technological change.

The model is the US Defense Advanced Research Projects Agency (DARPA), known for adopting diverse-funding approaches with a high risk tolerance. A UK Department for Business, Energy and Industrial Strategy March 2021 policy document suggests that ARIA may go even further than DARPA in experimentation.

With start-up planned for 2022, full details of ARIA’s approach have yet to emerge. One hope is that its activities will help improve knowledge on effective funding methods for the UK.

Instead, the three-to-five-year cycle of competitive grants can obstruct risk-taking by researchers, says Bowers. “They often have to have results before they can get the [next round of] funding. So, people tend to go for ‘quick wins’ rather than maybe conducting research that may take longer to come to fruition.”

Another problem that ARIA must address is that traditional government grant models tend to attract bids from established academic researchers with a strong track record of winning grants and publishing papers.

The inclination to stick to a successful formula may screen out the freshest ideas, start-ups and disruptors, but ARIA is expected to emphasise incentivizing different behaviour to attract a greater range of participants.

Fellowships focusing on entrepreneurial activities are one of the options that ARIA is considering. “If scientists have spent time being entrepreneurial and published less as a result, they may fall back in their careers,” says Rupert Lewis, chief science policy officer at the Royal Society, the UK academy that represents scientists’ interests to government

Other alternatives to traditional grant-based funding include:

Stage-gated funding, where grants start small and increase as each stage of the research is passed. These can encourage bids from less established inventors and scientists, who are a riskier bet. However, stage-gating allows acceptance of failure from such applicants at an early stage, reducing the funder’s risk of large losses.

In addition, opening up a challenge to all who can, say, construct an object that can fly 200 miles in less than two hours on electricity might yield more innovation than giving a large, upfront grant to an established aviation group to build a fully-realised electric aeroplane.

Setting up a succession of outcomes rather than one big end goal [build an object that can fly, rather than build an aeroplane] is also an effective way to encourage innovation, says Dyson. “They are more likely to encourage creativity and learning,” he says.

Inducement prizes, which are little-used by public-sector funders, but are more common among philanthropists. These are another way to bring out new ideas from contestants who might not normally seek government funding, nor have the resources to prepare bids. In addition, prizes can work as an inexpensive funding tool.

In 2014, Jeff Hardy, now senior research fellow at the Grantham Institute at Imperial College London, was a judge for Nesta’s £100,000 Dynamic Demand challenge for innovation in managing energy demand. Because the energy industry is so complex and heavily regulated, it is usually subject to incremental and very safe innovation, says Hardy, but the prize was a swift, cost-effective way to identify and drive new ideas.

The prevailing alternative is for companies to put costly proposals with a solid business case to the UK’s national innovation agency, Innovate UK. “This means you can’t have a great risk of failure,” says Hardy. “Whereas with these sorts of [prize] challenges, you can try out more wacky and uncertain ideas and fail fast.”

The prize was won by Exergy Devices, a company based in Cheltenham, England, for its product Hestia, a cost-saving energy-efficient smart home controller.

Prizes can also draw significant added investment to the target problem. The XPRIZE Foundation, a non-profit organization based in Culver City, California, designs public competitions to drive the development of technology in the US.

In 2004, its Ansari X PRIZE, a US$10 million winner-takes-all final product prize for building and launching a spacecraft, attracted 26 entrants and more than $100 million combined investment by competing teams.

Prizes can be combined with grants. For example, a minimal grant or contractor salary may be paid to scientists to carry out research that they could not otherwise afford upfront, with the prospect of a prize to incentivize high performance. Alternatively, a funding pot may rise incrementally for different competitors as they qualify through different stages of a research programme.

Seed grants are another option for trialling new ideas, with the added advantage of speed. The grant body issues small grants on minimal assessment criteria for delivery within a few months. Only a small fraction of the most promising seeds are followed up with further larger-scale investments.

Private sector co-financing can also be used to share the risk and rewards between public and private sector grant-givers. “If the private sector is prepared to provide some of the funding, it gives the public sector participants more confidence in the project,” says Lewis.

For a private company, government funding involvement provides a reciprocal level of comfort as to risk, as well as a discount on their R&D spending.