The government is trying to bolster its research workforce but academics say more needs to be done to improve the sector. 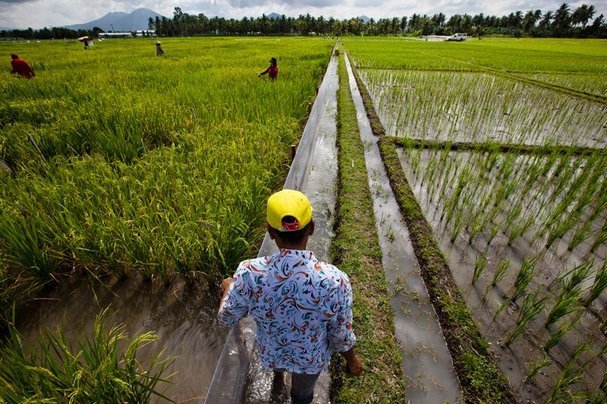 A farmer walks through fields at the International Rice Research Institute in Los Banos, the Philippines. The government wants to boost the number of agriculture scientists.

A renewed government effort to draw Filipino scientists back to the Philippines by paying them to set up their own research labs or teach has met with a mixed reception.

Some Filipino researchers applaud the goals of the effort. The government says it needs to bring research expertise back home to solve some of the country’s most pressing problems, such as climate-change mitigation.

Others suggest that resources would be better directed to mentoring early-career scientists before they think about leaving. “If you want Filipino scientists, you grow them,” says Vena Pearl Bongolan, an applied mathematician at the University of the Philippines Diliman in Quezon City.

An existing project designed to address the issue is the Balik Scientist Program, established in the 1970s. Since 1993, it has offered up to a three-year research grant, round-trip airfare and duty-free equipment imports to Filipino scientists willing to return home.

Last month, President Rodrigo Duterte signed a law that instructs the Department of Science and Technology to allocate more money to the Balik programme — although it doesn’t say how much — by adding benefits for returning scientists such as a monthly housing allowance, medical insurance and assistance for researchers’ children to attend schools of their choice. Between 2007 and April 2018, 207 scientists joined the Balik programme, some for stints of a couple of months and others for several years. The programme cost 173 million Philippine pesos (US$3.2 million) from 2007 to the end of 2017.

The department has not yet established exactly how the changes to the programme will work and how much extra money it will get. Several fields are listed as high-priority recruitment areas, including space, energy, artificial intelligence and agriculture and food.

In 2013, the Philippines had only 187.7 scientists per million people, one of the lowest densities of researchers in the region. The latest figures from the Department of Science and Technology estimate that the number of Filipino science and technology workers who moved overseas jumped from 9,877 in 1998 to 24,502 in 2009.

The revamped Balik programme is part of a government plan to increase development in the country, which came into effect last year. The government aims to boost the scientific workforce to 300 researchers per million people by 2022.

Biologist Michael Velarde, a current Balik scientist at the University of the Philippines Diliman, says the extra support for the programme is a good idea because the country needs more overseas-trained researchers to address challenges including preventing the spread of diseases such as Zika and studying how climate change affects health.

And he thinks the added financial incentives will attract more talent back to the Philippines.

But Bongolan is frustrated that the country is paying to relocate scientists from abroad rather than offering more scholarships that encourage local students to pursue science at university.

She participated in the Balik programme in July 2008 after studying and working in the United States for a decade, and is sceptical about whether some participants are in the Philippines for long enough to contribute meaningful research and development.

The Department of Science and Technology did not respond to Nature’s request for details on what participants had achieved. But a department spokesperson said each scientist set goals for their time in the country, and that all participants so far have met their targets. A statement posted on the department’s website last month noted that the Balik programme had "significantly contributed to the acceleration of the scientific, agro-industrial and economic development of the country".

Miguel Garcia, a Filipino neuroscience and economics PhD student at the University of Zurich in Switzerland, says the Philippines needs even more than money to lure researchers back from overseas. Scientists need access to the right facilities and other researchers in their discipline; these are lacking in his field, he says.