Can these sidelined conditions gain the traction they deserve? 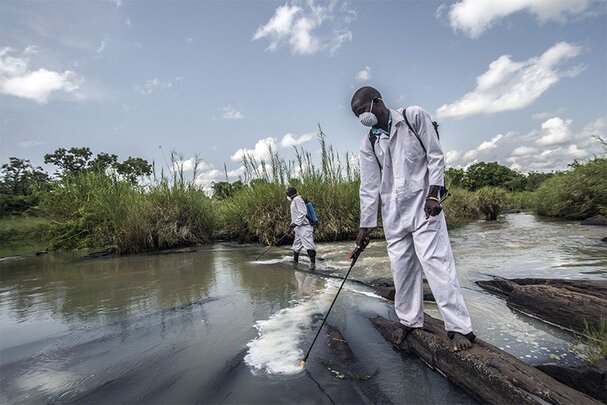 Larvicide sprayed into a river in a first-line effort to kill the black flies that transmit onchocerciasis.

Long before it was a flashpoint for controversy in the treatment of COVID-19, the antiparasitic drug ivermectin was helping to turn the tide against onchocerciasis.

This infection is caused by tiny worms transmitted by black flies that live near fast-flowing rivers, and can inflict serious damage to the skin and eyes, earning it the common name ‘river blindness’. Ivermectin efficiently kills off the young parasites, known as microfilaria, preventing severe disease — but not eliminating it.

“Mass drug administration has vastly reduced the endemicity of onchocerciasis in some areas,” says Samuel Wanji, who has studied the disease at the University of Buea in Cameroon for several decades.

But studies by Wanji and others have confirmed emerging resistance to ivermectin in Cameroon and elsewhere in central Africa. “In some areas where treatment has been going on for more than 15 or 20 years, we still have transmission,” says Wanji. Other solutions are urgently needed.

As of 2020, the World Health Organization (WHO) estimated that 218 million people in lower and middle-income countries (LMICs) were at risk of onchocerciasis. But this is just one of a score of debilitating ‘neglected tropical diseases’ (NTDs) affecting populations throughout the world.

The term refers to diseases that have historically been overlooked by the research community. Worldwide, NTDs affected more than 2 billion people in 2013, according to the Global Burden of Disease study — an initiative run by the University of Washington’s Institute for Health Metrics and Evaluation, which tracks the human impact of more than 350 diseases and injuries.

Greg Matlashewski recalls entering a largely empty field when he began working on the parasitic disease leishmaniasis 25 years ago. “People asked me why I would work in an area like parasitology,” says Matlashewski, who is based at McGill University in Montreal, Canada.

Things have since changed for the better. In 2012, the WHO joined with donors and drug companies to produce the London Declaration on NTDs, which calls for the control or elimination of a WHO-maintained list that now encompasses 20 bacterial, viral, fungal and parasitic infections as well as snakebite envenoming.

Among them, only cholera (9th) and dengue (10th) are among the top 20 diseases by article Count in the Nature Index for the period 2015–20. Several major funding organizations have made NTDs a priority, including the Bill & Melinda Gates Foundation, the Wellcome Trust and the Drugs for Neglected Diseases Initiative (DNDi), a Geneva-based non-profit organization.

But there is still fundamental inequality in infectious-disease research. Policy Cures Research, a think tank based in Sydney, Australia, has tracked global investment in infectious diseases in LMICs for 14 years as part of its annual G-FINDER report. Its 2019 report showed annual increases in overall global R&D funding for infectious diseases from diverse sources over several years.

“We’ve seen a big increase in public funding, and steady growth in funding or investment by industry, both large pharma and small pharma and biotech,” says Nick Chapman, Policy Cures Research chief executive, and lead author on the G-FINDER report. Although funding is dominated by the United States, Europe and Australia, Chapman notes that other countries, including Japan and India, are stepping up their spending.

Much of the funding goes to the ‘big three’ — HIV/AIDS, malaria and tuberculosis — which likewise dominate infectious-diseases research in the Nature Index database. They ranked first, fourth and fifth among the top infectious diseases by article Count, and together accounted for just under one-third of all infectious-diseases articles in the index for 2015–20.

These three diseases notched up more than US$2.7 billion in funding, according to the 2019 G-FINDER report, more than twice as much as all 33 other diseases and research programmes recorded in the report combined. Chapman says NTDs “haven’t benefited from the growing funding in the way the rest of the diseases have — it’s been pretty much stagnant for the last decade”.

COVID-19 has also taken a toll, both in terms of redirecting research priorities and in the economic damage that has reduced available funding overall.

The full extent of the disruption is not yet known, but in June, for example, the United Kingdom announced US$5.6 billion in budget cuts that would essentially end the country’s Accelerating the Sustainable Control and Elimination of Neglected Tropical Diseases (ASCEND) programme, which provided drugs, clinical training and medical care to tackle five NTDs with high incidence in Africa and south Asia.

There is also disparity among the NTDs themselves, where those such as dengue that affect wealthy as well as poorer countries draw more interest than those that do not. Nathalie Strub-Wourgaft, director of NTDs at the DNDi, notes that many infectious diseases languish in obscurity until the WHO moves to add them to its official list.

Strub-Wourgaft cites the poorly understood fungal disease, mycetoma, which occurs throughout the global tropics and routinely results in the loss of infected limbs, but only gained recognition from the WHO in 2016 after sustained advocacy from Ahmed Fahal, who heads the Mycetoma Research Center at the University of Khartoum in Sudan.

She says this made the disease eligible for investment from funders that only support projects related to diseases on the WHO’s list. “Once you have advocacy, you have visibility,” says Strub-Wourgaft. The DNDi is now working with a partner company to test antifungal treatment drugs for mycetoma.

Even for a well-equipped lab in a wealthy country, it can be challenging to secure dedicated funding for clinical NTD research. Matlashewski says that many funders wanted to see a track record of on-the-ground clinical research in NTD-endemic countries before offering support for his fieldwork on the leishmaniasis parasite.

He spent years working with the WHO, and ultimately led the agency’s efforts to eliminate the deadliest form of this disease from northern India, Nepal and Bangladesh. These programmes have made considerable headway. Nepal has achieved a 90% reduction in incidence between 2005 and 2020.

“Once you’re part of that effort, then it’s easier to go to the Gates Foundation or the Wellcome Trust,” he says.

Such in-country research projects also require close collaboration with local experts with robust fieldwork experience, as well as policymakers who will support and monitor the research.

This complex effort is crucial to produce the clinical data required by drug companies before they will consider developing a leishmaniasis treatment, for example, in contrast with the approach to a promising cancer drug, which may draw industry interest at the preclinical stage.

“If I didn’t do it, it just wouldn’t get done,” says Matlashewski. Leishmaniasis was the subject of 69 articles in the Nature Index for 2015–20, compared with 1,545 for HIV/AIDS, the most-studied disease over the period based on its Nature Index article Count.

The hurdles are higher for NTD researchers in disease-endemic countries. Wanji notes that African researchers receive no more than 0.1% of global research funding. A key component of this problem is the lack of laboratory infrastructure outside major research institutions as well as a shortage of trained staff.

A 2018 survey by the Collaboration for Research in Africa found that 80% of sub-Saharan academics had been compelled at some point to work without pay. And for scientists who do win support, their first grant may turn out to be their last, because they lack the resources to produce the deliverables expected by their funders.

As a consequence, says Wanji, many African scientists trying to go it alone ultimately quit or leave to work abroad.

“I’ve been successful by working with networks of researchers based in Europe or America, where we make synergy to look for funds,” he says.

These relationships can be highly fruitful. For example, Wanji is part of the Onchocerciasis Vaccine for Africa (TOVA) Initiative, a multinational effort to develop a protective shot that might accelerate the elimination of the tenacious disease.

Fieldwork in the often remote areas typically hit hardest by NTDs is a serious challenge. Strub-Wourgaft cites a recent research programme on treating African trypanosomiasis, also known as ‘sleeping sickness’, which is a mosquito-borne parasitic infection endemic to sub-Saharan Africa.

“We sometimes had no electricity, and there were water issues,” she says. “But you can overcome this with committed people.” This programme yielded an oral medication that can replace existing treatments, which are complex to deliver and, in the case of one that uses arsenic, can even be lethal.

Chapman hopes that the pandemic might rouse broader interest in fighting infectious diseases, much like after the 2014 Ebola outbreak, when “we saw a massive jump in funding for emerging infectious disease R&D”. NTD research could also gain flow-on benefits from the accelerated processes leveraged for COVID-19 vaccines and therapies.

But just how much investment might be needed to finally meet the goals set by the London Declaration remains unclear.

Chapman thinks a thorough review, which looks at current needs, promising treatments in the pipeline and their cost, is essential to inform a coordinated plan for future action. “It’s a hugely ambitious undertaking, but I think it would be incredibly valuable for policymakers and funders,” he says.