The two US cities have a peerless partnership for life sciences. 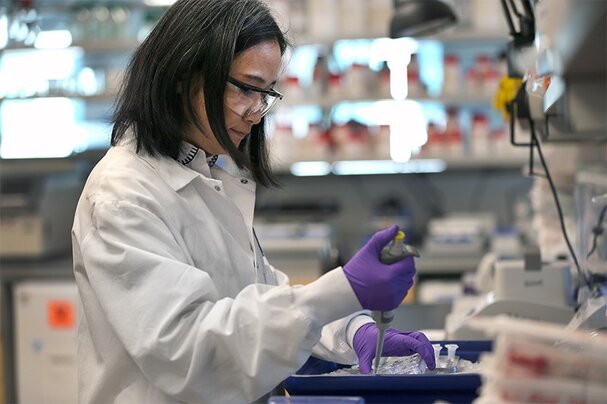 A scientist at Moderna, in Massachusetts, which has a promising COVID-19 vaccine candidate.

When Barry Bluestone moved to Boston, Massachusetts, in 1971 to take a job teaching economics at Boston College, the city was “in terrible shape”, he says, with high rates of poverty and unemployment. He took a rundown apartment in the Back Bay neighbourhood for US$204 a month (roughly $1,300 in today’s money) and was burgled twice in his first week.

A one-bedroom apartment in that same, now upmarket, neighbourhood, fetches double that rental, according to real-estate websites. A population that began shrinking in 1980 is growing again.

“Boston was just plain lucky,” says Bluestone, a professor emeritus of economics at Northeastern University, who has studied the impact of life sciences on the city. “It had all these universities, which until very recently were not very important economic institutions.

It had all these hospitals, like Massachusetts General Hospital, Beth Israel, and Brigham and Women’s Hospital, but healthcare was a minor part of the economy.”

Although many of these institutions date back a century or more, decades ago, he says, relatively few people went to college, and health care accounted for only a small portion of GDP. Now, as about 70% of high-school graduates pursue higher education and health care is roughly 18% of GDP, employment in the ‘eds and meds’ sector of Boston’s economy has grown from 10–15% of the total in the 1970s to 22.8% by June this year.

All those schools and hospitals are responsible for both economic vitality and high-quality research output. They have made the Greater Boston area a global hub of life-sciences research, second only to New York on Nature Index’s list of science cities for life-sciences output.

New York has a similar concentration of long-established, well-regarded universities and hospitals, including Columbia University, Rockefeller University, Albert Einstein College of Medicine, the Mount Sinai Health System and Weill Cornell Medicine, each among the top 10 New York life-sciences research institutions in the Nature Index; the Columbia University Irving Medical Center is the number two health-care institution globally in the index.

“These are all some of the top medical research institutions in the country and they all happen to be golf shots away from each other,” says Frank Rimalovski, who runs the Entrepreneurial Institute at New York University, which works to commercialize its research.

That density matters. Although researchers collaborate globally — and during the coronavirus pandemic even local collaborations are often conducted via online video chats — the proximity of other researchers sparks more informal interactions, from the canonical chat at a coffee shop to local meetings that happen more easily than international conferences.

Darcy Kelley, a neurobiologist at Columbia who studies the courting songs of African clawed frogs, says she regularly attends meetings of specialists based at various institutions in New York, New Jersey and Connecticut.

“Across the city there might be 50 evolutionary biologists,” she says. Those biologists have a monthly meeting that she attends. Biologists who study visual systems also have a monthly dinner. Such gatherings help scientists spark new ideas and research collaborations.

The concentration of institutes has also helped when recruiting faculty members, Kelley says, because it increases the odds of their partners also finding local jobs.

Once those start-ups have advanced drug candidates far enough to remove some of the risk of investing in them, the pharmas buy the smaller and often more innovative outfits. That pipeline means large companies will often provide funding for academic research, and also look to university labs as sources for new employees. An abundance of industry-based research positions in the vicinity may, in turn, help institutions attract top graduate students.

The interplay between academia and industry helped establish Kendall Square in Cambridge as a hub of life-science research. It is adjacent to the Massachusetts Institute of Technology (MIT), 7th in the world for life sciences research in the Nature Index and 2nd in Boston for life-sciences research after the world leader, Harvard.

Two of the top 10 Boston-area life-sciences research institutions in the index are biopharma companies with facilities in Kendall Square. The Swiss company Novartis has its global drug-discovery headquarters there, as does Moderna Therapeutics, co-founded by an inventor from MIT, Robert Langer, which is leading an effort to develop an RNA-based vaccine against COVID-19.

The high volume of research activity is supported in part by federal research funding. The largest share of funding from the US National Institutes of Health (NIH), almost $4.6 billion in 2019, went to California, by far the largest state. Massachusetts and New York each received roughly $3 billion in 2019.

Although Massachusetts is a much smaller state than either New York or California, it receives the second highest level of NIH funding. Those numbers provide a partial picture, because other federal agencies, such as the Department of Defense and the National Science Foundation, also provide research support.

Large populations can lead to more output, because they provide a diversity of patients and conditions, and vast amounts of data.

New York is Boston’s biggest collaborator in the index, and Boston is New York’s. But New York lags behind Boston and also areas such as San Francisco and San Diego as a biotech hub. To compete, the city launched a 10-year, $500 million programme in 2016 to promote the growth of start-ups. Both cities suffer from high real-estate prices that make it difficult to expand laboratory space.

Because the factors that go into creating these leading life sciences cities — a long history, density of institutions, desirable location — are difficult to replicate, it will be hard to challenge their dominance, Bluestone says.

Although Chinese cities are climbing up the index, he predicts the same cities will dominate at least the top 10 ranks for several years. “Once you have that kind of lead, usually if you don’t screw it up, you’ll continue to be able to grow in that sector to the point where you remain difficult to challenge,” Bluestone says.