The best of the best. 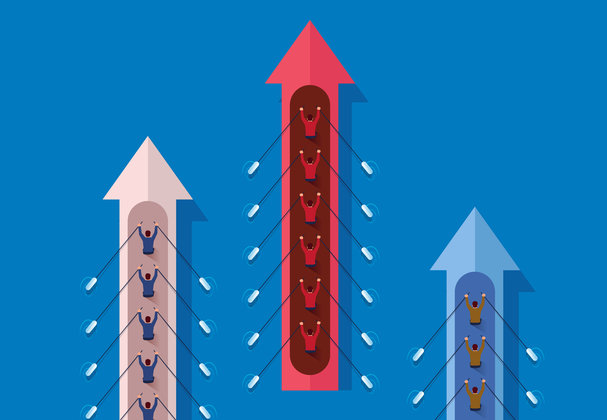 There are many ways Nature Index data can be analyzed to gauge who’s best at what in terms of high-quality scientific research performance. Below we present snapshots of some of our readers’ favourite rankings.

While the United States held its own as the biggest producer of high-quality research in our 2019 rankings, China rapidly gained momentum.

Share, formerly referred to in the Nature Index as Fractional Count (FC), is a measure of an institution’s contribution to articles in the 82 journals tracked by the index.

The University of Chinese Academy of Sciences made big leaps in the 2019 ranks, topping the fastest growing institutions and leading young universities.

Peking University entered the top 10 global institutions for the first time, while Tsinghua University saw the largest growth in output among the leading academic institutions in the Nature Index.

The Chinese Academy of Sciences maintained its stronghold as the top contributor of articles tracked by the Index in 2018. As China’s national research body — and the world’s largest research organization — it also recorded the largest growth in publications among the leading 10 institutions.

China’s Peking University has risen up the ranks, making its debut among the leading global institutions in the Nature Index. The university jumped two places in a year, knocking the University of California, Berkeley out of the top 10.

The top 10 fastest rising institutions in the Nature Index were all from China, with the University of Chinese Academy of Sciences taking the top spot. Its Share has increased by an impressive 200% since 2015.

Shanghai Jiao Tong University and Tsinghua University were close competitors in the ranks, with a Share of 118.04 and 114.09 respectively. The Chinese Academy of Sciences – the biggest producer of high-quality articles overall – was the seventh fastest growing institution in 2018.

Asian universities dominated the ranks among the world’s top 10 universities aged 50 and under, taking seven of the ten places.

South Korea’s young universities also made impressive gains in the ranks, taking three places among the top 10. The Korea Advanced Institute of Science and Technology ranked number four behind the Swiss Federal Institute of Technology Lausanne.

The United States maintained its position as the largest contributor to articles tracked by the Nature Index, but China is jostling its way to the top. Since 2017, the country’s Share has increased by 16.4%, while the United States’ Share fell by 2.9%.

Australia jostled Spain out of 10th place in 2018, with its Share rising by 8.2%. It was also the only country other than China among the top 10 that increased its Share.

Harvard, Stanford and MIT lead the pack for the fourth year running, having scored the largest Share of all institutions for articles published in the 82 journals tracked by the Nature Index.

Among the top 10 institutions, China’s Tsinghua University showed the strongest growth in high-quality research output, as measured by Share, compared with 2017. The Swiss Federal Institute of Technology Zurich and Peking University also made solid progress in 2018, each climbing the ranks by two places.