The technology could form the basis of a new generation of vaccines for diseases such as HIV/AIDS and malaria. 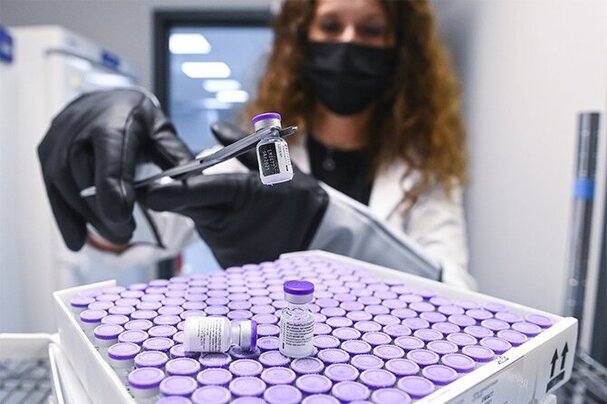 An early batch of the Pfizer BioNTech mRNA vaccine against COVID-19. The technology used expedited testing and manufacture.

The course of the COVID-19 pandemic was changed in late 2020 with a vaccine based on messenger RNA (mRNA), an unprecedented technology that has proved remarkably successful in protecting against the virus.

Not only is mRNA set to help get the world past the current crisis, it’s also generating hope for a whole new generation of vaccines that could protect people from everything from HIV/AIDS to malaria.

“We believe messenger RNA is the technology of the future for infectious disease,” says Mariola Fotin-Mleczek, a biologist and chief technology officer at CureVac, a biopharmaceutical company in Tübingen, Germany, that is working on several mRNA vaccines. Both big pharma companies and small biotechs are investing in the technology, aided by funding from governments and private foundations.

Bill Gates, whose Bill and Melinda Gates Foundation underwrites vaccine development, told USA Today in January that the possibilities were vast. “For every disease that we don’t have vaccines, we will try mRNA,” he said.

Conventional vaccines are made by cultivating the pathogen in an appropriate cell or bacterial culture — fertilized hen eggs are used for most influenza vaccines, for example — then applying various methods to inactivate it so it retains antigens but doesn’t cause the illness. The process can take weeks.

By contrast, mRNA vaccines are made by simply inserting a snippet of RNA code into a small DNA molecule in a cell, then quickly growing more in a reactor tank. Unlike the customized, iterative growth set-ups for conventional vaccines, the same process can be used for any mRNA sequence.

The resulting mRNA, introduced to a body, lets cells produce their own antigens, which the immune system then learns from. The COVID-19 vaccines, for example, instruct the body to make copies of the coronavirus’s spike protein.

The two COVID-19 mRNA vaccines that were approved in the United States, from Moderna of Cambridge, Massachusetts, and a collaboration between Pfizer and BioNTech of Mainz, Germany, had efficacies of more than 90% in clinical trials.

And after years in development involving hundreds of researchers at multiple research institutions and companies, the existing mRNA technology meant vaccines could be manufactured and tested at an unprecedented pace.

Speed and versatility make mRNA exciting to researchers. “You just need the sequence of the protein that you’re going to vaccinate with and you can make it quickly,” says Dennis Burton, an immunologist at Scripps Research in La Jolla, California.

Burton is among researchers at Scripps who are working with Moderna on a way to prevent infection with HIV, the virus that causes AIDS, which has eluded vaccine attempts for the past 40 years. They hope to make broadly neutralizing antibodies that can protect against various strains of the quickly mutating virus by attacking parts of the virus that don’t change much.

They do this by coaxing the immune system first to produce a rare antibody that usually shows up only after years of infection, then to repeat and fine-tune that production until there’s a strong, targeted response.

“We think you need to have a series of shots that coax the immune system into making the right kind of antibodies to protect you against HIV,” Burton says. Early-stage clinical trials have begun.

Creating and testing mRNA vaccine candidates quickly gives vaccine researchers more “shots on goal”, says Peter Hotez, a virologist, dean of the National School of Tropical Medicine at Baylor College of Medicine, and co-director of the Texas Children’s Hospital Center for Vaccine Development, in Houston. His group is working on an mRNA vaccine for Chagas disease, which is caused by a parasite and mostly found in Latin America.

They have chosen the most promising of several potential antigens to make a protein target with recombinant DNA. But creating and combining, say, four recombinant proteins into one vaccine would be expensive.

It might be easier and cheaper, Hotez says, to simply put the sequences for all four promising antigens on a strand of mRNA, producing a single vaccine that protects against multiple strains of a pathogen.

Some researchers are exploring a flu vaccine that could cover multiple strains, which could eliminate the problem of vaccine makers having to estimate months in advance which strains will be circulating in a given flu season.

The Bill and Melinda Gates Foundation is providing funding for the collaboration between Scripps and Moderna, and is a supporter of several mRNA programmes. It works with CureVac, having invested US$52 million in the company is 2015.

It is also supporting research into malaria vaccines at BioNTech, with hopes that a clinical trial will be ready to start by the end of 2022. Gates and BioNTech have announced plans to test a tuberculosis vaccine in 2022, and are collaborating on a vaccine against HIV.

CureVac, meanwhile, has partnered with GlaxoSmithKline in Brentford, UK, to work on up to five new mRNA vaccines, including for rotavirus and malaria. The companies are also developing a second-generation COVID-19 vaccine, which could cover several of the new variants of the virus.

In March, the US Defense Advanced Research Projects Agency (DARPA), which has long funded mRNA vaccine work, announced a $41-million grant to GE Research in Niskayuna, New York; the Broad Institute, Cambridge, Massachusetts; and the University of Washington, Seattle, to develop a manufacturing platform that will allow companies to quickly produce new mRNA vaccines.

Turning mRNA vaccine production from a bespoke technology into a standard industrial process could jumpstart an entire mRNA industry, says Kaigham Gabriel, an electrical engineer and chief operating officer for Wellcome Leap, a charity funded by the UK research funder Wellcome based in London to support ambitious research programmes.

Leap has launched a three-year, US$60-million drive to help researchers develop standardized manufacturing of mRNA. “It’s a doubling down on RNA as a platform technology,” he says.

Today, Gabriel says, researchers seeking to develop an mRNA vaccine need to either work with a large pharmaceutical company or have millions of dollars in investment.

Gabriel envisions an ecosystem in which researchers can develop and design their own vaccines, and then send them out to industrial partners for manufacturing, much the way some companies design proprietary computer chips, and then have them built at a large-scale fabrication company.

Researchers caution that mRNA will not miraculously transform vaccine development. Infectious diseases have multiple, varying mechanisms, and the immune system is notoriously confounding. mRNA technology is just one more approach scientists can try.

The technology might not work in diseases other than COVID if their antigens produce less robust immune reactions, warns Baylor’s Hotez.

Still, mRNA adds a weapon to vaccinologists’ arsenal. “When it comes to a new vaccine target or pathogen or disease process, we need to keep multiple technologies in play,” Hotez says.