Kyoto University is branching out in tough times

The president of Kyoto University, Juichi Yamagiwa, talks about the need for Japanese universities to take new directions to stay competitive on the international stage. 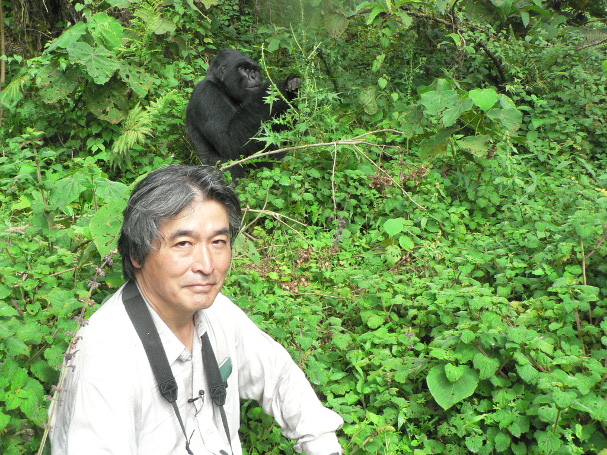 Juichi Yamagiwa's field observations of apes contributed to understanding of how human families were established.

Juichi Yamagiwa has been the president of Kyoto University, Japan’s No. 2 university in the 2015 Nature Index, since 2014. But, long before he learned to wrestle academic bureaucracy, Yamagiwa was being wrangled by great apes in Africa. He has the scars to show it. Yamagiwa spoke to Nature Index about the role universities should play addressing some of society’s big challenges, and the hurdles his own institution faces as government budgets for research become tighter.

Q: You started your fieldwork with gorillas in Africa in 1978. What is it like working with these remarkable creatures? And how did fieldwork help prepare you for managing a university?

A: When working with gorillas you have to forget you’re a human and act like a gorilla, otherwise they feel quite anxious. You have to copy their gait, eat the same kind of food and climb trees.

I learned a lot about how to deal with gorillas from my PhD supervisor, primatologist Dian Fossey, the first person to shake hands with a gorilla.

It takes quite a long time for gorillas to get used to you. I was beaten and bitten and had 17 stitches in my leg, as well as a big head laceration that required surgery. But I love fieldwork because I prefer to have a unique experience that can generate questions to study, instead of just dreaming up the questions from scratch.

Being a university president is a bit like taming wild animals, of which there are many in a university. They each think they are the best in the world. The challenge for me is to skillfully maximize each person’s outstanding abilities.

Q: Kyoto University researchers have worked with communities and local researchers in Africa and Asia. Why is it important for researching faculty and students to engage with local communities?

A: Kyoto University must be open to the world. I don’t just want to increase the number of international students. We are not nurturing students who will work for the benefit of just one country, but students who contribute to the world.

Asia and Africa are two regions where Kyoto University has many bases for fieldwork projects in urban planning, sedimentation, flora and fauna research, public health and disaster-prevention.

In our work there, researchers follow the philosophy of ‘having partnership and respecting ownership’. This idea is encouraged by the Tokyo International Conference of Africa’s Development, a regular conference for African leaders and their development partners, co-hosted by Japan and the United Nations.

Our goal is to conduct research with the perspective of local people in mind, and connect with local researchers. This goal was central to our help with establishing Jomo Kenyatta University of Agriculture and Technology in Kenya. In Asia, Japanese researchers have also worked with local scientists, working on projects focused on disaster prevention and agriculture development.

Q: Government science funding in recent years has been flat in Japan. How has Kyoto University fared? And how can the university produce high-quality research in this environment?

A: Many universities are facing diminishing funding. We are trying to overcome this with other sources of revenue, such as donations from corporations, despite an unfavourable tax regime in Japan for donations to universities.

The country’s rigid tax system only allows tax deductions for costs related to tuition but not for activities such as research. Universities suffer because individuals and corporations have limited incentive to make donations. Our annual budget is 160 billion yen (USD $1.4 billion) but donations only account for a small fraction.

According to data submitted to the government by the Japan Association of National Universities, donations to national universities totaled 70.7 billion yen (USD $626 million), which is more than 30 times smaller than the amount donated to America's state universities. We’re currently trying to raise 12.5 billion yen for the 125th anniversary of the university’s founding in 2022. The amount is very small compared with the endowments of Harvard or Stanford universities, but we cannot rely on donations. Meanwhile, our operating expense subsidies from the government have generally fallen every year. Universities have been told to be self-sustaining in terms of funding.

But the most important thing for our university is to have the best students, from both Japan and overseas. They can be nurtured to become prestigious researchers and prizewinners. We need them to form connections with researchers from other countries and institutions. It’s through these networks that they can generate research findings; funding alone won’t create such networks.

Q: Given these constraints, how can Kyoto University attract top researchers and teachers?

A: While some corporations award salaries and bonuses based on an individual’s achievements and company profits, it is difficult for universities to adopt such a system.

As a national university, Kyoto University’s staff are considered associate public servants. Their salaries are based on the length of service and recommendations from the National Personnel Authority. But public service pay hasn’t grown recently because of the government’s budget deficit.

On a limited scale we can decide salaries, without being influenced by the recommendations of the National Personnel Authority, in order to hire excellent researchers from Europe and the U.S, where salaries are five to six times higher than in Japan.

We’re trying to resolve this disparity through other means, including encouraging cross appointments in which a professor can get a salary from Kyoto University and other universities. Companies can also pay part of a professor's salary through industry-university cooperation. Kyoto University has a rule that states professors holding concurrent positions cannot be paid a salary from their other appointment that is higher than the remuneration we offer. We may need to relax that rule in future, or Kyoto University and other universities in Japan will suffer from a brain drain. Already some people have left our university for institutions in Europe and the US. But we also must remember that university research is different from working for corporations. And therefore we will continue providing both faculty and students with the best environment for academic freedom and creative thinking.