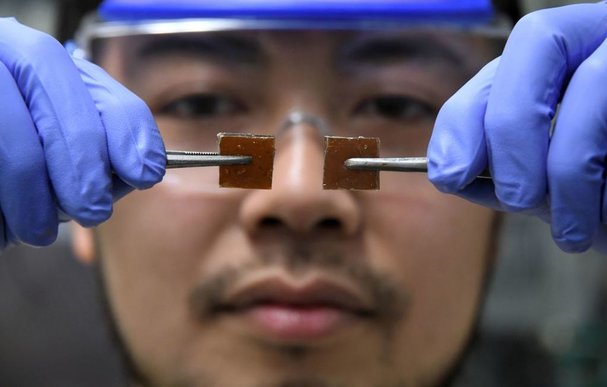 Yu Yanagisawa, a chemistry researcher at the University of Tokyo, displays two broken pieces of resin glass before repairing them at the university's lab.

Japan is maintaining its lead over France for fifth place in the Nature Index, as the two countries deal with a decline in high-quality research.

The two countries have held the same positions in Nature Index’s top countries ranking since at least 2015.

While the majority of Japan’s top 10 universities have seen declines in their output, the Tokyo Institute of Technology jumped one spot to fourth place, knocking Tohoku University in Sendai down to fifth place.

Among France’s top 10 universities, the University of Bordeaux in south-western France made an impressive leap from 10th place to seventh in just one year.

Both countries are working to improve their declining research output, with Japan focussing its efforts on international collaborations and the French government promising more stable funding and better career opportunities for the nation’s researchers.

Mouse over the graphs to compare Japan and France’s top universities:

+Share, formerly referred to in the Nature Index as Fractional Count (FC), is a measure of an institution’s contribution to articles in the 82 journals tracked by the index, calculated according to the proportion of its affiliated authors on an article relative to all authors on the article.