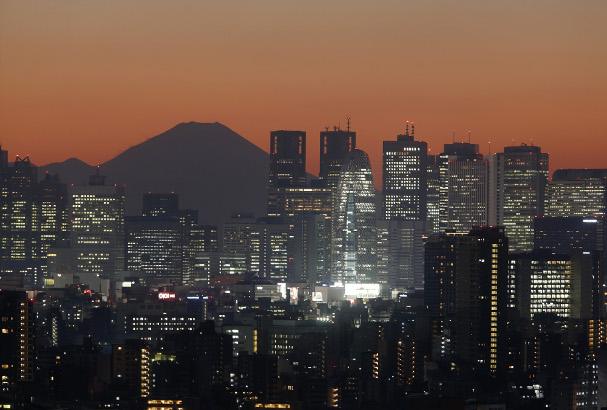 Mount Fuji behind the Tokyo skyline.

Our latest Nature Index issue looks closely at Japan’s recent research performance. Despite being among the top science nations, the country's publication output has stalled over the past decade.

Japan’s loosening grip on global science has been more pronounced compared to other research powerhouses. China’s science output, in particular, has grown dramatically. Chinese papers in the Web of Science (WoS) grew by nearly 300% between 2005 and 2015, and by almost 180% in the larger Scopus database. In 2015, almost one in five papers in WoS came from China, compared to about one in 10 papers a decade earlier.

China’s rapid growth has meant that Japan is losing its share of the world’s science output, along with other countries whose output is growing less spectacularly, such as the United States and the United Kingdom. In Scopus, Japan’s global share declined by more than a third over the decade, while China experienced extraordinary growth.

While the decline of the US and the UK is only relative to China’s output, Japan’s has also fallen in absolute terms. Japanese researchers published about 600 fewer papers in WoS in 2015 than in 2005. While the decrease is less than 1%, the country’s share of the world’s articles dropped from 8.4% to 5.2%. Data from the Nature Index also shows a decline of 19.6% in Japan’s contribution between 2012 and 2016.

Understandably this lull worries Japanese academics, research administrators, policy-makers and ministers. Because of Japan’s long period of economic stagnation, government spending on science has remained flat since 2001. A significant portion of this funding is also now steered towards specific initiatives designed to boost the international standing of the country’s top research universities.

To reviltalize research, Japan’s government has introduced a range of policies designed to recruit top international researchers. These measures, however,have yet to have a noticeable effect. Meanwhile, early-career scientists have fewer opportunities for permanent jobs.

Despite these woes, Japan remains among the world’s scientific leaders. The country ranked fifth in the Nature Index in 2016, based on its contribution to high-quality science.Japanese research is at a tipping point. If it cannot boost its output in the next decade, and nurture its high-quality science, the country risks losing its status as one the world’s top research nations.