It's the microwave: how astronomers discovered source of mysterious radio signals 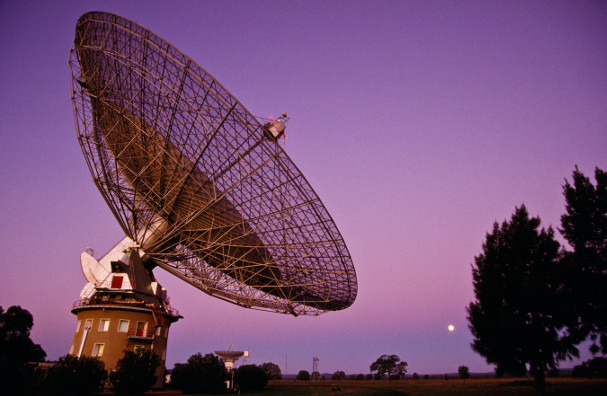 But during a stop in Singapore in March 2015, astrophysicist Emily Petroff gasped as she opened her laptop. An email from her collaborators in Melbourne revealed the answer to a significant mystery she’d been trying to solve.

For years, astrophysicists at the CSIRO Parkes Observatory in Australia had been puzzled by strange radio signals appearing on their telescope data.

The email now confirmed that the signals were created by scientists down the corridor, heating up their lunch in the staff micowave. “‘I knew it!’’ says Petroff after seeing the correspondence. “I thought, ‘this explanation is perfect’,” she recalls.

While Petroff was on her way back from a job interview in the Netherlands, the observatory’s operations scientist John Sarkissian and director of operations John Reynolds had been running an unusual experiment — heating up mugs of water in the facility’s kitchen microwave.

When colleagues at Swinburne University of Technology in Melbourne, astrophysicists Andrew Jameson, Ewan Barr and Evan Keane, then analysed the signals detected by the telescope during these tests, they confirmed that the microwave was indeed the source.

Petroff wrote most of the Monthly Notices of the Royal Astronomical Society paper reporting the discovery on her flight back to Melbourne.

In 2011 Sarah Burke Spolaor, a former PhD student at Swinburne, was sifting through telescope data in search of fast radio bursts (FRBs) — incredibly bright radio signals believed to have travelled from other galaxies – when she spotted some unusual signals.

Burke Spolaor later coined these “perytons”, named after the mythological winged elks, and threw a spanner in the works because they had a similar signature to FRB signals. But perytons registered on telescope receivers so brightly it was obvious they had to come from somewhere on Earth. Astrophysicists study these because they hold information about the matter of the Universe.

But astronomers worried the signals they were interpreting as FRBs may also be coming from a source on Earth. “Until the peryton mystery was solved, there was no way we could feel confident that what we were looking for were FRBs,” says Petroff.

Petroff led the charge on the hunt for the perytons’ source as part of her PhD work, and a breakthrough came January last year.

Swinburne’s Jameson had recently created a real-time detection system that was designed to detect FRBs, but proved useful for picking up perytons. The team detected three perytons in a week. Petroff called the observatory scientists in the hope of finding a possible cause for these — construction, a film crew or anything else out of the ordinary. None of these had occurred. However, the Parkes scientists said a new radiofrequency interference monitor, which could track the exact frequency of the perytons, had just recently been installed at Parkes. “That was the key — we needed a new way of looking at it,” she says.

Sure enough, the monitor had picked up the perytons Jameson’s system had detected, and crucially it revealed that the bright flashes had a frequency of 2.5 gigahertz. This narrowed the source to electrical devices such as WiFi, cell phones and microwave ovens.

There is no WiFi at Parkes, and there were few cell phones around in 1998, when the first peryton was detected. Petroff’s team was confident the two microwave ovens on site were the culprits.

But deliberately recreating a peryton was challenging. Dozens of microwave cycles remained unregistered on the telescope’s receiver for weeks.

That was until 17 March 2015, when Reynolds made an off-the-wall suggestion to open the microwave door before the cycle had finished. Bingo. A peryton showed up bright as day on the telescope receiver — a “relief” as Petroff puts it.

As it turns out, the microwaves created during the microwave’s shut-down phase have a similar frequency pattern to FRBs. If a microwave door is opened mid-cycle, the microwaves escape, registering as a peryton ping on the telescope’s receiver.

Solving the mystery turned out to be a good omen for Petroff, who got the job in the Netherlands and now tracks real FRBs to their intergalactic sources.

Meanwhile, Parkes astronomers’ lunch leftovers will no longer cast confusion on their observations of the Universe.