One of them does not yet exist. 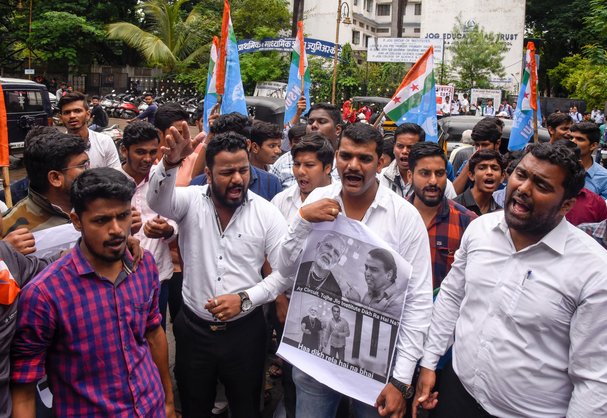 National Students Union of India members protest against the selection of the Jio Institute as an Institution of Eminence near the home of human resources development minister Prakash Javadekar in Kothrud, Pune.

India has announced the first six names on its much delayed list of 20 Institutions of Eminence in an initiative aimed at fostering the country’s development of ‘world class’ teaching and research institutions.

There are three publicly funded and three private universities among the six announced by the Ministry of Human Resources Development (MHRD) on July 9. Each will receive $145.9 million over five years, as well as greater autonomy in hiring foreign faculty, accepting foreign students, and taking part in academic collaborations.

Congratulating each institution in a series of messages on Twitter, HRD minister Prakash Javadekar said the initiative would help them grow more rapidly, improve quality and scale up their skills “so that they become world class institutes.”

But the nomination of the Reliance Foundation’s Jio Institute, which does not yet exist, drew strong criticism on social media. A defensive response from the government that the proposed institute fits the criteria for Institutions of Eminence in the ‘green field’ category has done little to quell disquiet over the inclusion of institutions yet to prove their value.

“I am baffled by the concept of 'green field' university as they are yet to prove their worth,” says Subhash Lakhotia, professor of zoology at Banaras Hindu University.

Since the initiative was first revealed by finance minister Arun Jaitley in his 2016 budget speech, it has been delayed by disagreement over whether to include institutions based on their global rankings, or on India’s new ‘national institutional ranking framework’ (NIRF) preferred by the MHRD, or a combination, favoured by the expert selection committee. MHRD prevailed, insisting national rankings would give institutions with strong potential a chance to join the elite ranks.

The six making it to the first cut include the Indian Institute of Science, Bangalore and the Indian Institutes of Technology in Mumbai and Delhi (ranked 1st, 3rd and 4th respectively in the NIRF); and the privately funded Manipal Academy of Higher Education, Manipal and Birla Institute of Technology and Science, Pilani (NIRF-ranked 18th and 26th respectively) as well as the mooted Jio Institute, in the western state of Maharashtra. There is no indication of when the other 14 institutions will be revealed.

The Institutions of Eminence initiative is part of a wider drive to boost performance and quality in India’s higher education and research sector. In a separate development, a leading Indian science academy released new policy guidelines in May for assessing the research output of individuals and institutions. The Indian National Science Academy, New Delhi cited concern over “significant inconsistencies” and “serious limitations of the various bibliometric parameters” used by government departments and funding agencies. Institutes in India are overseen by different ministries with no standard system for assessment of their performance.

“Inappropriate guidelines about assessment by different agencies and their misuse have seriously vitiated the research output and assessment scenario in the country,” INSA said.

The guidelines emphasise the quality and impact of research instead of relying simply on article counts in journals, including those with high impact factors, says Praveen Chaddah, a guidelines author, and a former director of the University Grants Commission Department of Atomic Energy Consortium for Scientific Research (UGC-DAE), Indore.

The guidelines “are perhaps the first to formally emphasize that making a distinction between 'national' and 'international' journals is derogatory, and has resulted in the stunted growth of good research journals in the country, while promoting the extremely dangerous breed of 'predatory' journals which call themselves 'international',” says Lakhotia, also a co-author.

The guidelines were welcomed for support of open access research and publication, among other things. They are “very much required and overdue,” says Sridhar Gutam, senior scientist at the Indian Institute of Horticultural Research, Bangalore, and convener of India’s open access movement.

The guidelines state that publication in predatory or bogus journals – named on a yet-to-be-completed list, recently published by the UGC — should not be counted.

They also promote the use of pre-print archives, “which not only safeguards claims of priority of data as well as ideas, but also permits free, unhindered open access to research,” says Lakhotia. Indian researchers will be able to more easily find online work by others from publicly-funded institutes, which has been mostly confined to pay-walled journals, says Anup Das, Centre for Studies in Science Policy, Jawaharlal Nehru University, New Delhi. He says less than 5% of Indian universities and less than 5% of Indian S&T institutions have established pre-print repositories.

India also proposes to replace UGC with a new regulatory body, and is making attempts to ensure that disbursal of university grants is objective, transparent, based purely on merit and online, to end outdated paper-based administration.