Scientists were ready with a “plug and play” protocol when COVID-19 hit. 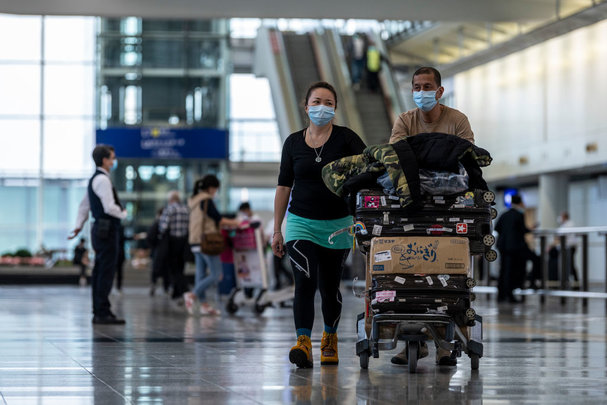 Passengers are seen wearing mask in the arrival hall inside Hong Kong International Airport on February 22, 2020.

Since early this year, researchers have been racing to understand and characterize COVID-19, the illness caused by the SARS-CoV-2 coronavirus, before it becomes unmanageable. The virus, originating in Wuhan, China, was confirmed by Chinese officials and the World Health Organization (WHO) on 7 January, and named by the WHO on 11 February.

Comparisons have been made between the current crisis and 2003, when the Severe Acute Respiratory Syndrome (SARS) virus spread from the south of China to countries including Canada, Spain and Russia, infecting 8,098 people and killing 774. SARS first appeared in November 2002 and was characterized as a coronavirus in late March 2003, in work that was fully published in Science at the end of May 2003. At the time, it was considered one of the fastest, most effective responses to a public health emergency ever.

Science has had to get even faster since, because of an even higher risk of diseases crossing borders due to population growth combined with more international travel. As frightening as the idea of a killer mystery virus spreading rapidly around the world is, researchers are used to it.

“It’s a process that's happened in the past few years,” Tulio de Oliveira, a bioinformatician at the University of KwaZulu Natal in Durban, South Africa, says. “We had Zika in 2015-16, we had Yellow Fever in 2016 – during that process we learned how to work together and share data quicker. By the time coronavirus came along we already knew how to work faster.”

While the virus has spread to 37 countries and territories, infected over 75,000 people and killed more than 2,500, over 160 posts have been made on preprint servers like arXiv and medRxiv (see here for latest statistics). Many countries have trained a small army of medical professionals in using equipment to detect coronavirus, a consortium of scientific publishers have made their coronavirus research publicly available, and in China more than 80 clinical trials have been launched to test COVID-19 treatments.

When, in 2002-2003 it took scientists about six months to publish full genetic details of the SARS coronavirus, many saw it as a success of astonishing scientific speed.

But what took months for SARS has been done in days for COVID-19. On 11 January this year, the first full genome sequence of COVID-19, by a consortium led by Yong-Zhen Zhang at Fudan University in Shanghai, was posted to virological.org, a discussion forum. This was followed the next day by a post by Zhang’s team on the biological preprint server bioRxiv. It was accepted for publication by Nature on 3 February.

By 2 February, de Oliveira and collaborators had posted, also to bioRxiv, details of web-based software that can rapidly identify and classify genomes from the novel coronavirus using Zhang’s group’s genetic analysis (see ‘Science around the world’).

“We have bioinformatics equipment, and because we were involved in the Zika and Yellow Fever outbreaks we knew we could adapt our software to be useful in a fast way.”

de Oliveira is excited by the speed and openness with which the scientific community has reacted to COVID-19, especially in how researchers have used preprints, open websites and social media to share results and so saved time by bypassing traditional publishers. “We’re doing it live and posting it openly, so the whole scientific community has access to the results,” he says.

John McCauley, runs the Worldwide Influenza Centre from The Francis Crick Institute in London, one of six global centres which monitors flu strains and informs vaccine development. McCauley says that much of the preparation to contain any potential outbreak had already been done. “We're always waiting for this to happen with something like influenza and so when something analogous turns up you just sort of change gear,” he says.

A large part of the work to contain COVID-19 — or something like it — happened between May 2015 and May 2016, when the WHO developed a ‘blueprint plan of action’ for responding to global health emergencies in the wake of the 2015 West African Ebola epidemic.

In March 2018 the WHO drew attention to the need to prepare for a virus unknown to science, by including a ‘disease X’ on its list of priority diseases for research.

“History tells us that it is likely the next big outbreak will be something we have not seen before”, John-Arne Rottingen, a scientific adviser to the WHO committee, told UK newspaper The Telegraph at the time. “We want to see ‘plug and play’ platforms developed which will work for any, or a wide number of diseases; systems that will allow us to create countermeasures at speed.”

The WHO’s blueprint has two goals. One is to set out a plan to be proactive before a health crisis emerges, by encouraging research and development into a prioritized list of pathogens considered risky. Another is to provide a series of steps for the global health community to rapidly solve the problem of an emerging infectious disease or similar crisis once it inevitably arrives .

John Edmunds, a leader in disease modelling and analysis at the London School of Hygiene and Tropical Medicine who has been involved in preparing the UKs response to COVID-19, says much of the global scientific response to the virus has been defined by the WHO’s blueprint. “WHO are using networks and committee structures they’ve already had in place,” he says. “The blueprint covers all of the high consequence pathogens like Ebola – they have networks of individuals they’re coordinating to get information passed around and to have a work plan outlining who’s going to be doing what.”

To match the speed of science, many traditional publishers have also started accepting preprints, taking down paywalls on COVID-19-relevant work, and expediting peer review. Many, including Springer Nature, the publisher of Nature Index, signed a statement on 31 January backing the rapid sharing of research results in the wake of the coronavirus outbreak (Nature Index's journalism is editorially independent from its publisher).

“The statement builds on an earlier statement that Wellcome did back in early 2016 at the time of the Zika outbreak,” says David Carr, a programme manager in an open research team at the Wellcome Trust, which organized the memorandum. “We, in a similar way, got a group of funders and journals at that time together to agree to some principles around the rapid release of data and findings relevant to that outbreak and potential future public health emergencies.”

Even the process of posting a preprint has seemed ponderous to some researchers, compared to the immediacy of picking up the phone or emailing colleagues. Researchers are sharing information in their own networks days before any preprints are posted, says Edmunds. “There’s clinical trial networks; there's a modelling network; a clinical network: these sorts of things are really helping the distribution of key information really rapidly. Even before they come out on preprints they’re being circulated on these networks and might come out on medRxiv a couple of days later,” he says.

And even these collaboration networks might seem slow compared to a trawl through the Twitter feeds or websites of prominent scientists collaborating against the new coronavirus. de Oliveira, for example, says his group would likely have not been able to respond as fast as it did to the virological.org posting that provided the basis to his diagnostic tool without rapid collaboration and encouragement from other scientists on the social media platform.

Trevor Bedford, a bioinformatician at the Fred Hutchinson Cancer Research Center in Seattle, and one of the collaborators on de Oliveira’s preprint, runs the open-source map nextstrain.org, which has been collecting the genetic analysis work done on COVID-19, in order to build a map of its evolution. The project aims to have “~1hr turnarounds from public deposition of genome data to inclusion in the live transmission tracking,” Bedford wrote in a 31 January blog post. Nextstrain and Bedford both have active Twitter accounts which are hubs of open discussion between collaborating bioinformaticians and researchers.

Whilst there has been much to celebrate about the global scientific response to COVID-19, there are still lessons to be learned, says Edmunds. For example, the Chinese government has been relatively slow at sharing the detailed information needed to help predict the further spread of the virus, he says.

“We’ve learnt an amazing amount about this virus in an amazingly short amount of time but we don’t know anywhere near as much as we should from China,” he told Nature on the 6th of February.

de Oliveira praises some aspects of the Chinese response, pointing to one medRxiv preprint that suggests the early actions of its government might have prevented thousands of infections.

He is largely optimistic about what the world’s response to COVID-19 means for the future. He describes the response as “one of the few times the scientific community have put their egos aside and learned to work together.”

Jack Leeming is an editor for Nature Careers in London.