Radar data of the red planet’s south pole had scientists deliberating over the possibilities. Could it really be liquid water? 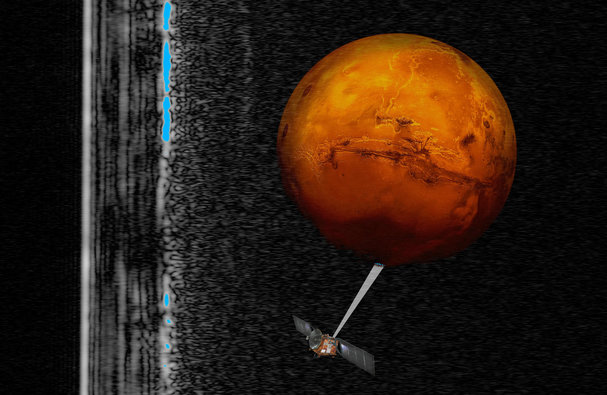 An artist's impression of the Mars Express spacecraft probing the southern hemisphere of Mars.

If there is a rule for finding life on other planets, it’s follow the water. So when Roberto Orosei found the first evidence of long-standing liquid water on Mars, it was a major breakthrough.

“The search for water on Mars is essentially the search for a habitat in which life could survive,” says Orosei, who works at the National Institute for Astrophysics in Italy.

Using a radar instrument on the European Space Agency’s Mars Express spacecraft, the astrophysicist and his colleagues surveyed the red planet’s Planum Australe region, located in the ice-capped south pole. Radar signals showed that the region had a similar profile to bodies of water found beneath ice sheets on Earth.

While persuasive, the observations have yet to be confirmed, sparking widespread online discussions about the possibility of actually finding liquid water on the planet.

Richard Zurek, chief scientist for the Mars Programme Office at NASA’s Jet Propulsion Laboratory (JPL) told Wired: “I can’t absolutely prove that it’s water, but I sure can’t think of anything else that looks like this thing does other than liquid water."

Other researchers weren’t so sure. Jeffrey Plaut, a project scientist for JPL’s Mars Odyssey, told The Washington Post that the presence of the 20-kilometre-body of liquid water is “certainly plausible, but it’s not quite a slam dunk yet.”

Forbes’ headline also questioned whether the results were really a signal of water: “Is there liquid water on Mars – or a really salty slushy?”

Author of the article, astrophysicist, Brian Koberlain, explained: “Mars isn’t geologically active, so its interior is cold. At the depth of this particular region, the temperature is estimated to be almost -70 degrees Celsius. That’s far too cold for liquid water, even if it’s under pressure,” he said.

“So what gives? There is a way to liquify water, even at -70 Celsius: make it really, really salty.”

We have liquid water on Mars (again). This may not come as a surprise since some of you still remember the 2015 headlines, but those in particular were famously dismissed as probable sand flows. This is different. Here’s the latest: https://t.co/5jJKA7AoFq

The paper’s Altmetric Attention Score, which tracks online mentions, soared, reaching 4,231 as of 22 January 2019. The article was fifth among the most popular articles in the Nature Index journals, with the top paper scoring 8,700.

National Geographic, MIT Technology Review and Smithsonian were also among the 300 news outlets that jumped on the findings.

On Twitter, the paper kicked off a #Mars topic trend with more than 2,000 users sharing the article. It also made its way onto 44 blogs and 24 Facebook pages.

Someone call Kevin Cosner and Bruce Willis. We have a #WaterWorld & #Armageddon crossover coming.#Mars #RedPlanet #WaterOnMarshttps://t.co/O5CkAaL6zW

The stunning discovery is hardly a story of overnight success. Orosei says it was the result of more than a decade of hard work, during which time his career and scientific productivity stalled.

“It was the right thing to do, but the system does not reward prolonged efforts that bear results only in the long term,” says Orosei. “I could make it only because I had tenure, otherwise I would have been forced to change subject or quit.”