Companies publishing high-quality research are looking to academia for assistance. 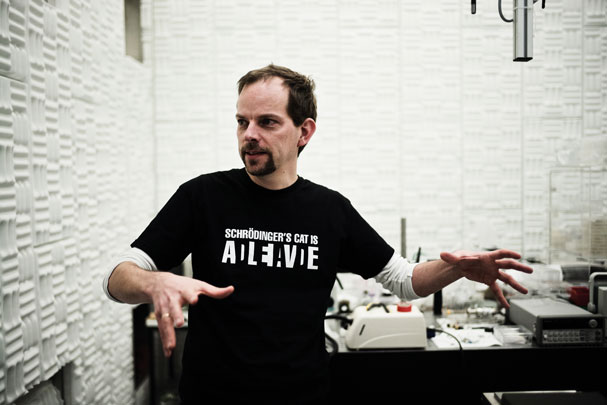 IBM scientist, Bernd Gotsmann, has created new ways to measure heat in nanoscale objects. IBM research in the 1980s helped usher in the field of nanoscience.

From DuPont's invention of nylon in the 1930s to Bell Labs’ observation of cosmic microwave background radiation in the 1960s, corporations have always been occupied with basic science questions. Their efforts translate to a small but perennial presence in the scientific literature. Corporate contribution to high-quality research in the natural sciences has hovered around 2% over the past five years in the Nature Index.

Among the inquisitive class of scientists progressing this corporate share is physicist Bernd Gotsmann at IBM, the top company in the index, ranked by its contribution to the authorship of papers between 2012 and 2016.

Gotsmann works on nanoscale electronics and has created new ways to measure heat transfer in nanoscale objects. He has published close to a dozen articles in the index. Decades ago, scientists at IBM’s research lab in Zurich, Switzerland, took an intellectual interest in the profile of surfaces on an atomic scale. Their probing led them to create the scanning tunnelling microscope in 1981, which in turn helped to usher in the thriving field of nanoscience.

Answering fundamental questions leads to scientific breakthroughs that transform industries and society, says Gotsmann, even if it means waiting decades for those ideas to take off.

Enlisting the help of academic partners can help to speed the process up. Index data suggest that corporate–academic collaborations are on the up, doubling from 10,383 bilateral partnerships in 2012, in the form of at least one co-authored paper between the pair, to 21,320 in 2016. Of the papers authored by corporate researchers over the five-year period, 85% were in partnership with academic researchers. IBM alone has collaborated with 381 academic institutions on articles tracked by the index.

Sara-Jane Dunn, a mathematician in Microsoft Research’s Biological Computational Group, collaborates with academic researchers on most of her projects, tapping into their vast experimental power. Dunn develops models of stem cells, reimagining them as tiny computers, processing information to make decisions. Ultimately, she hopes to make cells programmable, which could lead to advances in medicine, agriculture and energy. “If we can understand the programmes cells are running we might be able to edit existing functionalities, or write new functionalities,” says Dunn.

In biomedical research, the connections can be even more close-knit. The largest number of partnerships between a corporate and an academic institution in the Nature Index in 2016 was in the life sciences, with 13,114 collaborations.

James Ernst, a senior scientist in protein chemistry at the biotech company Genentech, a subsidiary of Roche, says that he publishes with partners within the company when working on an area where the company has deep expertise, such as antibody engineering. In a recent paper published in the Journal of Biological Chemistry, a group of Genentech scientists described a type of engineered antibody that is both easier to manufacture and, potentially, reduces certain types of toxicities in animals and humans.

But in areas where Genentech is not as experienced, Ernst seeks out external academic partners. In 2013, Genentech collaborated with the Walter and Eliza Hall Medical Research Institute in Australia to identify a way to inhibit a protein that stops cancer cell death, research that was published in Nature Chemical Biology. The results eventually led to the development of the chronic lymphocytic leukaemia drug Venetoclax.

Sometimes, Ernst reaches out to investigators with intimate knowledge of a transgenic or engineered animal model, as he did with researchers at Vanderbilt University in Nashville, Tennessee. Working with engineered animals can be tricky, says Ernst. Since they’re living organisms, it takes time to discover their properties. “We could do it here, but it would take longer and slow the whole research process down,” he adds.

Often collaborations create a complete story for submitting to research journals. Ernst says it’s not uncommon to find a corporate team and an academic team engaged in complementary parts of a problem. Both sides know that the publication power would be boosted by a joint effort, so they decide to do the research together. “Genentech views a strong basic research effort as key to our ability to produce cutting-edge medicines, and our ability to attract and retain top-tier scientists,” says Ernst.

In 2008, Gotsmann and his colleagues at IBM were tasked with building noise-free labs. The labs shield experimental setups to an extreme degree from the four most relevant external influences: temperature variation, electromagnetic radiation, floor vibration and sound.

The team found all the expertise they needed internally, and published their research in the journal Nanoscale. But for other projects, Gotsmann calls on collaborators at university labs. Making the decision to partner with a university or to go it alone depends on the stage of the research, he says. “What we in industry appreciate about partnerships with academics is the understanding of more fundamental insights.”

In the early 2000s, Gotsmann worked on a project to miniaturize the old-school, punch-card data storage system, which stores computer memory on tiny pits burned into polymers. The team wanted to reduce the mechanical friction and wear of the nanoscale system, codenamed Millipede, as it recorded and read pits on the polymer film.

Researchers at IBM had developed a method to measure and model this wear, which they used to test the materials they had in their lab. But they wondered whether other materials and coatings would perform better for the application, so they got in touch with mechanical engineer, Robert Carpick, at the University of Wisconsin, Madison (now at the University of Pennsylvania), who studies the fabrication of carbon-based materials in terms of nanoscale friction and wear. Carpick brought new materials and insight to the project.

Both sides benefited from the results. The collaboration generated several papers published between 2010 and 2012, including one in Nature Nanotechnology. “We showed how differently materials wear on the nanoscale and how superbly some of the carbon-based materials perform,” says Gotsmann.