We look at the top 5 Earth and environmental science articles by Altmetric Score from 2012 to 2017. 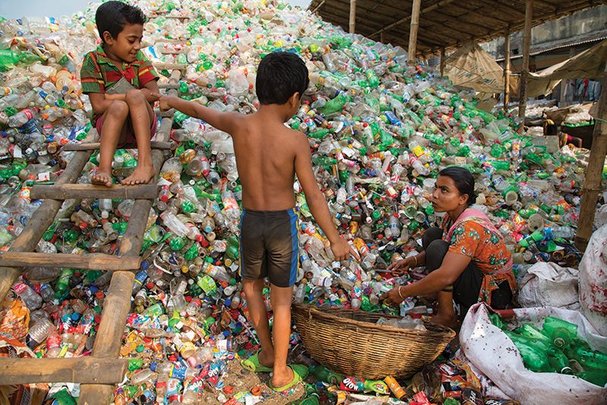 Production, use, and fate of all plastics ever made Year published: 2017

In just six decades, humans have produced 8.3 billion metric tonnes of plastic, and most of it has accumulated in the natural environment. If the trend continues, around 12 billion metric tonnes of plastic will accumulate in landfills by 2050. The alarming findings, published in Science Advances, came from the first global analysis of all plastics ever made. With almost 2,500 tweets, 265 news stories and 34 Facebook posts, the article won the highest Altmetric score of all articles in the Earth and environmental science journals tracked by the Nature Index from 2012-17. An Altmetric score is a measure of online attention that is regularly updated.

Climate change in the Fertile Crescent and implications of the recent Syrian drought Year published: 2015

In 2006, Syria was hit by the worst drought in its history, causing 1.5 million people to flee rural areas. The mass migration was among the factors that led to a civil war that continues to ravage the nation. According to a study published in Proceedings of the National Academy of Sciences, climate change was the main cause of the drought and subsequent conflict. The paper was shared more than 2,000 times on Twitter, and was mentioned in 162 news stories and 62 blog posts.

Five mass extinction events have occurred over the last half-billion years. Now, we are facing a sixth mass extinction that is more severe than previously thought, according to research published in Proceedings of the National Academy of Sciences. The decline of more than 30% of vertebrate species is due to human activities, the study concludes. The paper was shared by more than 1,600 Twitter users, 196 news outlets and 32 blogs.

When searching for life on other planets, the presence of water is often the first sign researchers look for. After years of speculation, a NASA team confirmed that the dark streaks on the surface of Mars are caused by salty water that flows seasonally. Published in Nature Geoscience, the results were the first direct evidence of flowing liquid water on Mars. The research was mentioned in more than a thousand tweets, 173 news stories and 38 blog posts.

Exceptional and rapid accumulation of anthropogenic debris on one of the world’s most remote and pristine islands Year published: 2017

Remote islands are often seen as pristine environments that are free from pollution and human activity. But, a study published in Proceedings of the National Academy of Sciences revealed that one of the world’s most isolated islands, Henderson Island in the South Pacific, is also the most polluted. The analysis estimated that more than 17 tonnes of plastic litter the island’s beaches. The paper made more than 250 news headlines, 390 tweets and 23 blog posts.