The lack of research institutes with links to Africa has scientists worried about the next Ebola outbreak. 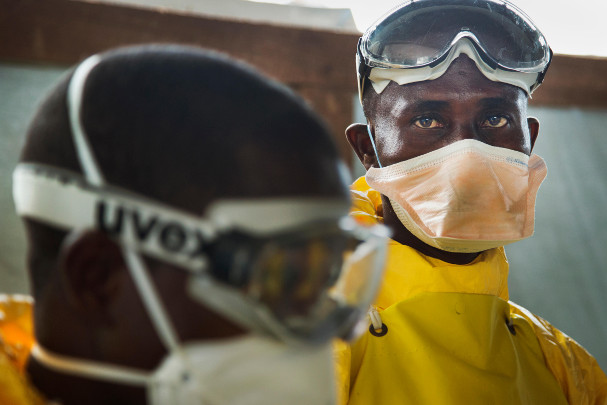 By the time Ebola struck West Africa in 2013, in the largest recorded outbreak of the virus, a network of global research institutes had formed to study and contain the epidemic. But that network was heavily skewed toward a handful of key power brokers in the West, a new analysis shows, with few partnerships engaging with local research institutes in the countries worst affected by Ebola.

The researchers say that the exclusion of local scientists and health authorities impedes the development of vaccines and life-saving drugs ahead of the next outbreak.

A team in Germany led by Peter Tinnemann, a global health researcher at Charité - University Medicine Berlin, pulled bibliographic data from the Web of Science database of all the articles on Ebola published between 1976 and 2015. They identified 2,528 papers in total, which included authors from more than 1,600 institutions in 101 countries, mostly in North America and Europe.

As Tinnemann and his colleagues reported in the October issue of PLOS Neglected Tropical Diseases, these institutes were linked through around 10,000 authorship connections between pairs of institutions.

The degree of connectedness — a proxy measure of multi-institutional collaboration — has increased steadily in the decades since Ebola was first reported in Africa in 1976. Compared to only 30 actors forming 60 connections between 1976 and 1986, there were around 1,500 institutions forming more than 9,000 connections in 2006–2015.

However, the co-authorship connections were not evenly spread around the world. Rather, they were clustered around a small nexus of highly influential organizations. These included three linked to the US government (the Centers for Disease Control and Prevention, the National Institutes of Health, and the Army Medical Research Institute of Infectious Diseases); the World Health Organization in Geneva, Switzerland; and two universities, one public (the University of Marburg in Germany) and one private (Harvard University in Cambridge, Massachusetts).

Largely absent were institutions based in Sierra Leone, Guinea or Liberia. “What we are missing are the local players from the countries that are affected,” says Carlos Morel, director of the Brazilian National Institute of Science and Technology for Innovation in Neglected Diseases in Rio de Janeiro.

Institutions which are far from endemic regions are driving the research agenda, says Stephen Kennedy, a physician-scientist with the Liberia Ministry of Health in Monrovia. This has the potential to cause a significant "void for national ownership and sustainable research growth after these partners eventually depart.”

In Liberia, the situation has improved rapidly since the data cut-off point of Tinnemann’s analysis, says Kennedy, noting that hundreds of local scientists are now engaged in state-of-the-art research, including through the many Partnership for Research on Ebola Vaccines in Liberia (PREVAIL) clinical studies launched in 2014. This level of productivity and capacity, he says, is “unmatched for a post-conflict country without prior research structure that have, in three years, reshaped the clinical research platforms in West Africa.”

But will it be enough for Liberia to take more of a leadership position if and when the next outbreak strikes the country? For inspiration, Kennedy looks to Brazil, another developing nation recently ravaged by a viral epidemic.

Morel, who pioneered the use of co-authorship network analysis as a tool for strategic planning of research on neglected diseases, conducted an investigation of research collaborations during the 2015–2016 Zika virus outbreak that started in his home country and spread through Latin America.

In as-yet unpublished work, he found that local research centres — including Brazil’s Oswaldo Cruz Foundation, to which his institute belongs — were much more involved in the worldwide race to study Zika and its related health complications than any organizations in the countries affected by the latest Ebola outbreak. That helps explain, in part, why the global response to Zika was much more swift and thorough, he says.