The 5 most popular scientific papers of September 2019

The top paper had a slick social media campaign. 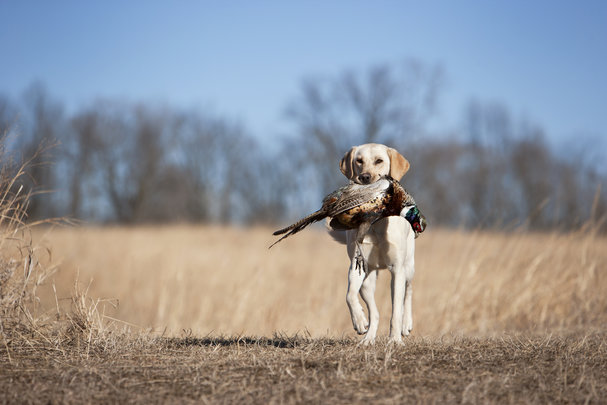 Retrievers have developed brains that are particularly good at processing coordination, eye movement and spatial navigation.

There is still doom, thanks to September’s most popular study — a media-friendly Science paper about the alarming decline of North American bird species — but there’s a feeling of whimsy, too, as we learn the German word for “joy jumps” performed by game-playing rats (it’s "freudensprung").

Below is an Altmetrics ranking of September’s most popular papers in the natural sciences, published by the 82 high-quality journals tracked by the Nature Index.

1. "Decline of the North American avifauna"

For those following research news closely, this particular paper being on top shouldn’t come as a surprise. It even came with its own hashtag, #BringBirdsBack.

Led by Ken Rosenberg, a conservation scientist from the Cornell Lab of Ornithology, this Science study reports that North American bird populations have seen significant declines since 1970, dropping by nearly three billion — an overall decline of 29 percent.

The study came with evocative visualizations and an accompanying op-ed in The New York Times. The American Bird Conservancy, a non-profit where Rosenberg has a joint appointment, launched a website as the paper was published, 3billionbirds.org, and a YouTube video.

Some baulked at what they perceived as a lack of nuance in the messaging.

The paper was the most widely discussed study in September and was covered by more than 200 online news outlets. It reached almost six million users on Twitter.

A team from AI pharma start-up, Insilico Medicine, and the University of Toronto, Canada, described how it took 46 days for an AI system to create a potential new drug for fibrosis treatment.

The proof-of-concept study showed how it might be possible in the future for pharmaceutical companies to fast-track the extremely expensive drug discovery and design process by automating some of the early stages.

The study was a hit on Twitter, being tweeted about by almost 2,500 users. Members of the US and Russian public were the most engaged audiences, according to Altmetrics.

3. "Measuring actual learning versus feeling of learning in response to being actively engaged in the classroom"

This paper might not have received much online news coverage, but it made an impact on social media, particularly with American users, who represent 33% of the engaged audience.

Led by Louis Deslauriers, director of science teaching and learning at Harvard University's Faculty of Arts and Sciences and senior preceptor in physics, the study found that students who engage in active learning take in more — but feel like they learn less — than peers in more lecture-oriented classrooms.

The results, which suggest that this disconnect is in part due to active learning being harder than passive learning, left readers musing over what the lecture theatres of the future would look like.

"The article does not suggest that students don't like active learning," Deslauriers told Colleen Flaherty at Inside Higher Ed. "In fact, the data in the article shows students liked active learning and they felt they learned from it. But it just happened that students felt more positive about a highly-polished version of the same lecture."

The study reached a Twitter audience of more than four million.

Online audiences lapped up this paper, which showed that different dog breeds have physically different brains.

The study was led by Erin Hecht, an assistant professor in the department of human evolutionary biology at Harvard University, who teamed up with Marc Kent, a veterinary neurologist at the University of Georgia.

Kent provided Hecht with MRI scans of 62 healthy purebred dogs from 33 different breeds, which revealed how selective breeding has led to key differences in brain regions linked to characteristics such as coordination, eye movement and spatial navigation.

“This might sound a little goofy, but it’s also profound — our brains have been shaping the brains of another species,” Hecht told Ed Cara at Gizmodo.

5. "Behavioral and neural correlates of hide-and-seek in rats"

Another feel-good study, this time highlighting the playfulness of rats. A team of neuroscientists from Humboldt University of Berlin in Germany spent several weeks observing how rats behaved in a small room filled with boxes.

They found that the rats seemed to enjoy both hiding from and seeking out their human companions, even when food rewards weren’t on offer.

As Issam Ahmed reports for Phys.org, “The rats appeared to genuinely enjoy both finding their sneaky human companions and being caught by them, as shown by their joyful leaps (what the Germans called "freudensprung") and ultrasonic giggles that previous work has found is a sign of happiness.”

The study, which suggests how the game of hide-and-seek can cross species, was covered by more than 70 online news outlets and reached a Twitter audience of more than 4.5 million.

The 5 most popular scientific papers of August