The 5 most popular scientific papers of April 2020

A colossal sea beast and a swampy rainforest at the South Pole feature in some of the stand-out papers from April. 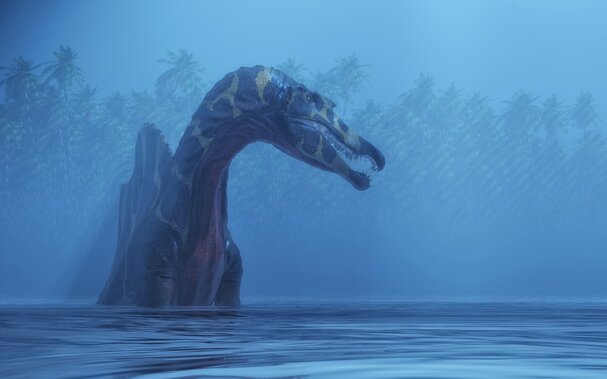 Below are the five most popular papers of April published in the 82 high-quality journals tracked by the Nature Index.

Although research related to the coronavirus pandemic was generating headlines daily, three out of the five were non-COVID-19 research that managed to attract strong attention.

Ranked by Altmetric attention score, April’s most popular studies feature strange new fossils that are helping researchers piece together Earth’s past, as well as a call-to-action to shore up the future of oceans.

The virus-related study that garnered the most attention, published in Cell, has reached more than 9.5 million people on Twitter.

1. “SARS-CoV-2 Cell Entry Depends on ACE2 and TMPRSS2 and Is Blocked by a Clinically Proven Protease Inhibitor”

Figuring out how SARS-CoV-2 (the virus that causes COVID-19) gains entry into human and animal cells could provide key insights into how the virus is transmitted, while also revealing the best approaches for treatment and prevention.

SARS-CoV-2 also appears to need an enzyme called TMPRSS2, and a few other proteins, to help prime the spike proteins for cell entry, the paper found. “This means that cells must express all of these proteins for the virus to be able to infiltrate them and hijack their machinery to replicate,” Leslie Kay reports for Scientific American.

Led by Markus Hoffman from the biology unit of the German Primate Center at the Leibniz Institute for Primate Research, the paper suggests that a TMPRSS2 inhibitor could form the basis of a new treatment for COVID-19.

The paper, published in Cell, was the most talked-about for April 2020. It has been covered by 142 online news outlets so far, and was tweeted about by almost 5,000 Twitter accounts.

A change of pace in a month where the pandemic had peaked for many countries, this paper described a new fossil left behind by one of the most unusual dinosaurs, Spinosaurus aegyptiacus.

Turns out, Spinosaurus was just as fearsome in the water as it was on land. A fossilised tailbone uncovered in Morocco by University of Detroit Mercy palaeontologist, Nizar Ibrahim, and his team suggest that it was a swimming predator powered by a giant, fin-like tail.

Hydrodynamic tests using a robotic flapping device revealed that Spinosaurus’s ‘newt-like’ tail shape produced an impressive amount of thrust – all the better to pursue prey with.

The paper, published in Nature on April 29, was covered by more than 100 online news outlets. It was tweeted by a whopping 26,488 users, reaching an estimated audience on the platform of almost 9 million.

Limited knowledge of how the SARS-CoV-2 virus infects humans at a molecular level makes the development of treatments and vaccines difficult.

This study, involving more than 100 scientists, cloned, tagged, and expressed 26 of the 29 SARS-CoV-2 proteins in human cells to identify which human proteins are directly affected.

The scientists, led by molecular biologist Nevan J. Krogan and his team at the University of California, San Francisco, identified 66 ‘druggable’ human proteins and 69 compounds that target these proteins.

"It is amazing this team of 100 researchers completed this so fast, given that the genetic sequence of the virus was not available for study until January,” said one of the authors, Bryan L. Roth, from the University of North Carolina at Chapel Hill, North Carolina School of Medicine, in a press statement.

Presented by Nature as an unedited manuscript that has been accepted for publication, the paper is an example of how journals have adjusted their processes so the public and the scientific community can access the information faster.

The paper has been covered by more than 100 online news outlets and almost 4,000 users on Twitter, according to an Altmetric attention analysis.

Scientific papers rarely opt for such a simple title, and while the task it describes is anything but straightforward, the message of this study is that it is doable.

The study states that the recovery of marine populations, habitats, and ecosystems is crucial for our sustainable future on Earth, and significant gains can be made by 2050 if major pressures, such as climate change, are mitigated. This is described by the authors as a ‘Grand Challenge’ for humanity.

Led by Carlos Duarte from the Red Sea Research Center at the King Abdullah University of Science and Technology in Saudi Arabia, the paper reviews data on recovery times for marine species populations and fish stocks, interventions such as habitat protection and restoration and water quality improvement, and estimated costs for recovery initiatives.

Published in Nature, it’s been covered by 175 online news outlets so far and more than 1,700 users on Twitter.

5. “Temperate rainforests near the South Pole during peak Cretaceous warmth”

Evidence of a swampy rainforest that existed on Antarctica around 90 million years ago has been found deep below the ocean, at a site near the Pine Island glacier of west Antarctica.

Through a narrow hole drilled 30 metres into the sea-floor, a team led by Johann Klages from the Alfred Wegener Institute in Germany extracted fossilized roots, spores, and pollen from ancient plants such as conifer trees and ferns.

“It is like if you would go to a forest near your house somewhere and drill a hole into the forest soil,” Klages told The Guardian. “It is really pristine … it was amazing.”

The paper has been covered by more than 200 news outlets and 1,250 Twitter users, according to Altmetric.