Researchers working with Indigenous partners are benefiting from traditional knowledge of the natural world. 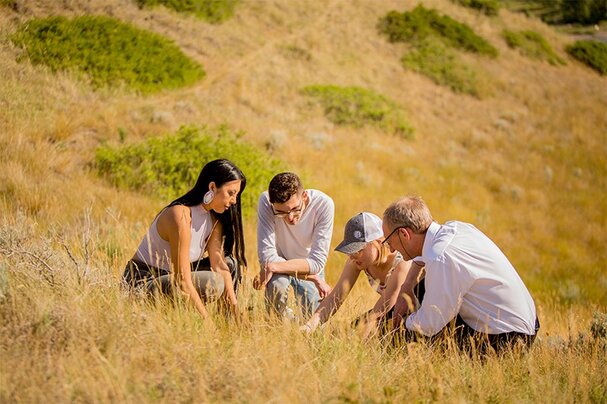 Investigating how an extract of the traditional medicinal plant, Sooyaiaiitsi, interacts with cancer cells helped Haley Shade to “walk in both worlds”, bridging her education within Canada’s system with her Indigenous identity.

Shade, a Blackfoot woman from the Kainai First Nation in Alberta, Canada, chose to study the plant for her undergraduate honours research at the suggestion of her grandfather. “It was important to me that the research began with my grandfather and learning that oral history, but also bringing it to life with Western science,” she says.

Shade’s research was conducted as part of the Prairies to Pharmacy programme at the University of Lethbridge in Alberta. Run by Roy Golsteyn, a biochemist and director of the university’s Cancer Cell Laboratory and Natural Product Laboratory, the programme aims to find plants in the Canadian Prairies with potential medical uses.

One half of the programme is dedicated to standard chemical analysis of prairie plants, says Golsteyn, which grow in a 1.7 million km2 expanse of grasslands, farmlands and forest in Canada’s western provinces of Alberta, Saskatchewan and Manitoba.

The Gaillardia aristata plant, for instance, is being investigated for potential anticancer properties, having been shown by Golsteyn and his team to inhibit mitosis in human cells (A. Bosco et al. Mol. Biol. Rep. 48, 5459–5471; 2021).

The other half of the programme is a collaboration with Elders from the Piikani and Kainai First Nations in Alberta to study plants and medicinal compounds used by their communities.

“When we talk about plants in Canada, what immediately comes to mind are the First Nations people who have been here since time immemorial and have thrived with these plants,” says Golsteyn. “We only do experiments using traditional knowledge if a member of that community is involved.”

Embracing different perspectives and ensuring mutual benefit for those involved is essential, says Jesse Popp, a wildlife ecologist at the University of Guelph, and member of the Anishinabek Nation, in Ontario.

In Canada’s Arctic regions, for example, maintaining long-term data sets that capture shifts in environmental conditions over time can be difficult and expensive, but the people who live there have first-hand, intergenerational knowledge on how things have changed, which is starting to be recognized by scientists, says Popp. Such collaboration can help communities prepare for the impacts of a warming climate, as well as being part of the process of reconciliation between Canada’s Indigenous peoples and non-Indigenous population, she says.

In 2020, Carmen Wong, a Parks Canada ecologist at Kluane National Park in the Yukon territory of northwest Canada, along with several Indigenous and non-Indigenous co-authors, published a paper with 10 ‘calls to action’ to help scientists improve their relationships and collaborations with Indigenous peoples (C. Wong et al. FACETS 5, 769–783; 2020).

The calls include understanding the socio-political context around research sites, seeking out advice from Elders for respectful ways of handling animals, and providing opportunities for Indigenous community members to participate in the work.

“There is often a real disconnect between natural scientists and the objectives of Indigenous communities, even though both are seeking to understand the land and patterns on the landscape,” says Wong.

Lawrence Ignace, one of the co-authors, who is Anishinaabe, studies the use of Indigenous knowledge in environmental science at the University of Victoria in British Columbia. He says their paper should help collaborations get off to the right start and ensure that benefits of the work are shared equally.

“Without that, you risk your research being halted by the communities,” he says, because of a lack of social licence.

For Golsteyn, respecting Indigenous knowledge includes the appropriate use of language in his work. When studying plants that have been identified through traditional knowledge, he uses only the original Indigenous name for the plant, not the English common name or Latin scientific one.

He says this has led to some pushback in grant applications, and it means he must think carefully about where to submit the work for publication, but it’s a way to show respect. “If you’re going to work with people, you have to start with their names,” he says.

A careful approach to collaboration is the only way to achieve good outcomes for academics and the Indigenous communities they work with, says Popp.

I think of it like a braid of sweetgrass, with three strands,” she says. “Two are the Indigenous and Western ways of knowing, but a braid with two strands will unravel. You need a third strand, and that is doing the research in the right way.”