European universities rise to the challenge 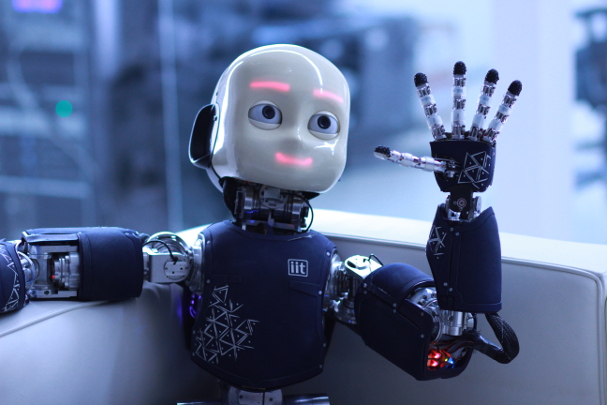 The Italian Institute of Technology's iCub was built to test whether a robot can learn through physical interaction.

As a continent, Europe is home to the most rising stars in the index.

The performance of research strongholds like the Chinese Academy of Sciences and the University of Oxford have improved dramatically in the past few years.

As the research world's equivalent of Apple or Google, these well-established organizations have big budgets, some of the best brains and top-notch equipment.

So, what about the new kids on the block? As a database that tracks articles published in top-tier science journals, the Nature Index is well placed to identify the world's research rising stars.

The top 100 most improved institutions in the index between 2012 and 2015 are ranked by their contribution to 68 high-quality journals, a metric known as weighted fractional count (WFC). Here we profile rising star institutions based in Europe. Some were selected as rising stars because they improved the most in their country, and others were highlighted for their meteoric rise up the index's global rankings.

The University of Regensburg's improvement in the index is driven mostly by chemistry, with the university placing 11th among the country's academic chemistry institutions in 2015.

As head of the chemistry department, Oliver Reiser points out, “that puts Regensburg above many universities a lot bigger than us.” The department has a mere 18 tenured academics, compared to more than 25 at the University of Stuttgart (ranked 13th) and more than 40 at the Ruhi University Bochum (19th).

In 2010, Regensburg, in south-east Germany, won special status from the national funding agency for its studies of photocatalysis — chemical reactions accelerated by sustainable sunlight — which secured the department additional funding until 2019.

Regensburg's physics department hosts a similar centre researching carbon-based nanostructures. Overall, the university's contribution to index papers grew by almost 28%, the largest surge by any German institution in the top 100 most improved institutions.

The Max Planck Society is funded by the state, but operates as a private foundation. “They are a little bit more agile than universities,” says Roberto Cingolani, scientific director at the Italian Institute of Technology, which opened its main laboratory in Genoa in 2009.

The institute's 1,300 research staff are spread across 11 labs around the country and two small units at premier US universities, Harvard and the Massachusetts Institute of Technology. Since 2012, the institute's scientists increased their contribution to index papers more than any other Italian institution.

The institute concentrates on nanotechnology, robotics and brain science. The work is more connected than it might first sound. “Our general mission is 'translating evolution into technology',” Cingolani says. The institute's best-known piece of research is its humanoid research robot, iCub, developed to test the idea that a robot, like an infant human, can develop an understanding of the world around it via physical interaction with its environment.

There's no great mystery behind the rapid rise of the University of Sussex in the index. In 2012, the university didn't place in the first Global 500 ranking. But that year, it began strategic financial investment in key disciplines, in particular, physics and astronomy. The number of research staff has increased by more than 60%, from 23 in 2012/13 to 40 today and is still growing, says astrophysicist, Peter Coles, who leads the school of mathematical and physical sciences.

Recruits were brought in to reinforce existing strengths in astronomy and particle physics, and to establish programmes in quantum technologies and condensed matter physics.

Mainly thanks to a quadrupling of its physical sciences score, the university reached 351 in the Global 500 in 2015. That represents an 83.9% rise in its contribution to index papers since 2012 — the biggest jump of any UK research organisation in the top 100 most improved institutions.

The standing of Jagiellonian University in Krakow, Poland, has fluctuated since its foundation in 1364, often buffeted by shifts in the balance of power in central Europe. But, the oldest university in Poland is also the country's rising star, having increased its contribution to high-quality research papers by 79%, the largest increase of any Polish institution in the top 100 most improved institutions.

In 2010, Jagiellonian was awarded a European Union regional development grant to host Poland's first synchrotron. Completed in late 2015, the synchrotron has yet to contribute directly to the university's performance in the index. However, the synchrotron was integral to Jagiellonian's successful 2012 bid, with partner research organizations in Krakow, to become Poland's flagship research centre for physics and chemistry — a status that guarantees additional government funding. The research financed by this grant is already helping boost Jagiellonian up the Global 500 in which it ranked 370 in 2015.

The French government shook up its science funding in 2009, introducing a euro47 billion 'Investments for the Future' fund to boost national competitiveness in targeted sectors. Some euro5 billion of the fund was allocated to biomedical research, according to Yves Lévy, CEO of the French National Institute for Health and Medical Research (INSERM). “Given INSERM's focus, we were very well placed and have won many of these grants,” Lévy says. All INSERM's researchers work in research units embedded in French universities, most of them in university hospitals.

Since 2012, INSERMS's contribution to the index grew the most of any French institution in the top 100 most improved list, and it placed 136 in the Global 500 ranking in 2015. But as Lévy notes, some of its highest impact research is published in medical journals such as the New England Journal of Medicine, which are not included in the index.

The rise came despite declines in state funding, which the university sought to offset with external sources, including six major laureate grants from the Novo Nordisk Foundation between 2012 and 2014 totalling US$36 million.

But, the funding cuts are now a major crisis that could jeopardize the university's gains: In February 2016, due to budget constraints, the university announced it would lay off 7% of staff — 500 people, including more than 100 researchers — and impose a hiring freeze.

Switzerland's city of Basel is a hub for life sciences research and home to the headquarters of pharmaceutical giants, Novartis and Roche. In 2007, the University of Basel decided to play to this strength and make life science its key focus.

The university's strategy was supported by the regional government, says Christian Sengstag, deputy vice-rector for research at the university. “Lots of resources have been pumped into life science research,” he says. New research groups have been established, and the university has invested “in top-notch infrastructure and buildings.” Last year Basel scientists used single-molecule spectroscopy to show how E. coli bacteria fold the proteins that form their outer membrane — a long-standing drug discovery target.

Political support can be fickle, however. Federal elections held in 2015 saw a strong swing toward the right-wing SVP party, which has vowed to cut government spending. “In the future we will probably have to live on a lower budget,” says Sengstag.

Sweden's temperate environment is a world away from tropical Latin America, where the Zika virus continues to wreak havoc, but researchers at the country's Umeå University have joined the fight to stop Zika spreading further. Global health is one of Umea's key strengths, and that includes an EU-funded consortium, established at the university in 2011 to fight Dengue fever. (Zika and Dengue are transmitted by some of the same species of mosquito.)

Umeå University's contribution to high-quality science increased by 57% from 2012 to 2015, placing it in the top 400 institutions globally. Founded in 1965, the university prioritizes biotechnology and life sciences, and its regional forests in particular have yielded plenty of research. In 2013, The Umeå Plant Science Center, a collaboration between Umeå University and the Swedish University of Agricultural Sciences, mapped the Norway spruce genome, which comprises 20 billion base pairs — more than six times as many as the human genome. Its energy research portfolio also includes developing biofuels from trees.