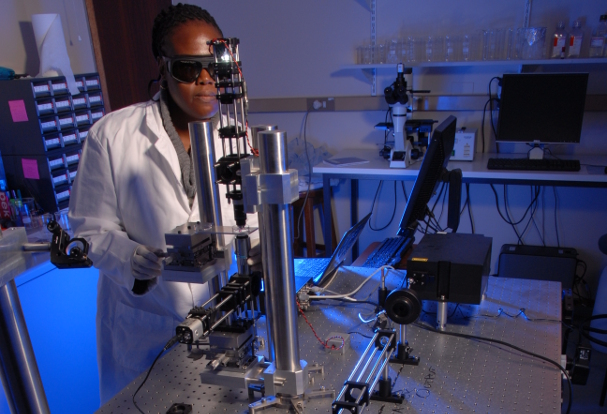 An optical trapping setup at South Africa's Council for Scientific and Industrial Research.

Less prominent research nations are carving out a niche.

This performance reflects the country's selective advantage in astronomy — it is home to the southern hemisphere's largest optical telescope and a significant proportion of the world's largest radio telescope, the Square Kilometre Array, which is under construction.

Stephen Fine, an astrophysicist at the University of Western Cape, told Nature Index that increased investment in astronomy, and specifically funding related to SKA Africa, is the main driver of any increase in the number of publications in physical sciences in recent years. Fine's article on counting quasar-radio sources appeared in the index last year.

But the country's improved research performance has occurred against a backdrop of student protests, which have erupted at some of its top research universities. The students are calling for more affordable university education.

South Africa spent 0.73% of its GDP on research in 2013/14, the latest year that was available, a sharp drop from before the global financial crisis when private sector R&D spending pushed total expenditure to 0.89% in 2008.

A major force for R&D in South Africa is the government-backed Council for Scientific and Industrial Research (CSIR), one of the premier research organizations for science on the continent. In 2013, researchers from the council, along with colleagues from the University of KwaZulu–Natal, developed the world's first laser whose output beam shape can be digitally controlled. The technology, published in Nature Communications, used a rewritable holographic mirror to replace the standard laser cavity mirror and has potential use in manufacturing and communications.

Known for its resorts and Buddhist temples, Thailand is also a regional centre of R&D and high-tech manufacturing. It's the world's second-largest exporter of hard disk drives and a major centre for car production.

A major player is the state-backed National Science and Technology Development Agency (NSTDA). Established in 1991, it supports centres of excellence in genetic engineering, biotechnology, electronics and nanotechnology.

Thai scientists such as a chemist at Chulalongkorn University, Patchanita Thamyongkit, have been raising the profile of home-grown research. Her work on the chemistry behind solar cells that use organic compounds, known as porphyrins, helped earn her the Abdus Salam International Centre for Theoretical Physics prize in 2013; she also scooped a L'Oreal-UNESCO accolade in 2014 for women in science. “Thailand is ambitious about upgrading to world-class level,” says Thamyongkit.

However, the country suffers from a paucity of researchers and funding. It had only 13 R&D personnel per 10,000 people in 2014, according to the National Science Technology and Innovation Policy Office (STI). Only about 0.5% of Thailand's GDP is devoted to research. The government wants to increase that to 1% next year, but is relying on the private sector to contribute more than two-thirds, about US$2.5 billion.

“Thailand is focused on cultivating a new generation of young scientists by promoting a number of fields in order to support innovation in strategic sectors targeted by the government,” says Kittipong Promwong, secretary general of STI. Fields will include biotechnology, biomedical devices, robotics and the Internet of Things.”