Funding for translational research is boosted under joint initiatives to develop indigenous vaccines. 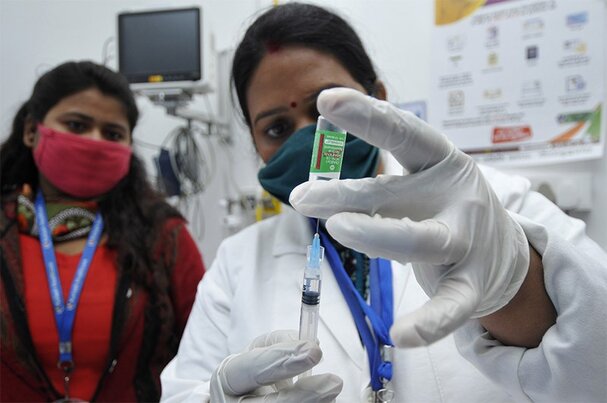 A health worker prepares a Covishield vaccine dose at a private hospital in Noida, India.

The COVID-19 pandemic has highlighted hurdles in India’s quest to become a leader in translational research. The government has funded dozens of proposals from labs and companies to develop COVID-19 vaccines, drugs and diagnostics, intending to create local solutions to the pandemic.

Some investments have paid off, yielding two licensed vaccines, Covaxin and Covishield, and a range of diagnostic tests. But the race to develop these has exposed weaknesses, in the lack of an innovation ecosystem to create high-quality products from scratch, and an eagerness to declare success too quickly.

“Research agencies in India like to be distributive: they give many grants to many institutions. But a new vaccine won’t happen because you gave 10 people grants to study the pathogenesis of an organism. You need to build an ecosystem with multiple partnerships.”

India should build self-sufficiency in developing vaccines, says Kang. Developing a vaccine requires skills across the research and development cycle: basic scientists who study the organism, translational scientists who design the vaccines, clinical researchers who test them. The country lacks enough experts on all three fronts, says Kang.

This is reflected in India’s vaccine portfolio: of the nine COVID-19 vaccine candidates that were in, or had passed, human trials by February 2021, eight were developed in collaboration with foreign institutions.

Even Covaxin, the vaccine widely referred to as ‘indigenous’, developed jointly by the government-run Indian Council of Medical Research and the Hyderabad-based private manufacturer Bharat Biotech, uses an adjuvant licensed from a US firm.

Covaxin’s success is tainted by controversy. When the Central Drugs Standard Controls Organisation, India’s regulator, licensed it in January 2021, alongside Covishield, an Indian version of Oxford AstraZeneca’s AZD 1222, Bharat Biotech hadn’t completed phase III trials to establish Covaxin’s efficacy, and questions were raised over the speed of the process.

Bharat Biotech released preliminary results of phase III trials for Covaxin in early March 2021, announcing an efficacy rate of 81% in preventing COVID-19 in patients with no prior infection after a second dose. Nevertheless, India’s immunization programme has had a lower-than-planned uptake, and some participants have rejected Covaxin, including some hospitals and doctor associations.

Until now, most companies have relied on imports and reverse engineering for molecular diagnostic kits, says Taslimarif Saiyed, who heads the Centre for Cellular and Molecular Platforms, the government-funded institute coordinating InDx.

In July, with a grant from the Rockefeller Foundation in New York, InDx began guiding more than 70 Indian companies through developing their own tests, including making reagents locally. More than 20 companies have so far had their kits licensed for commercial use.

Lack of funding has always been a constraint for Indian science. At 0.7% of its gross domestic product in 2017–18, India spends less on science than comparable emerging economies, such as Brazil and China.

The pandemic may be a turning point for spending, however. In initiatives applauded by health researchers, the Indian government in its 2021 budget pledged funds for four new virology institutes and a health institute to track the interface between human and animal disease.

Another promising pledge was a grant of 500 billion rupees (US$6.86 billion) to create a National Research Foundation, intended as a central body to spawn interdisciplinary research.