Corporate research in the life sciences endures, despite diminishing in other fields of science. 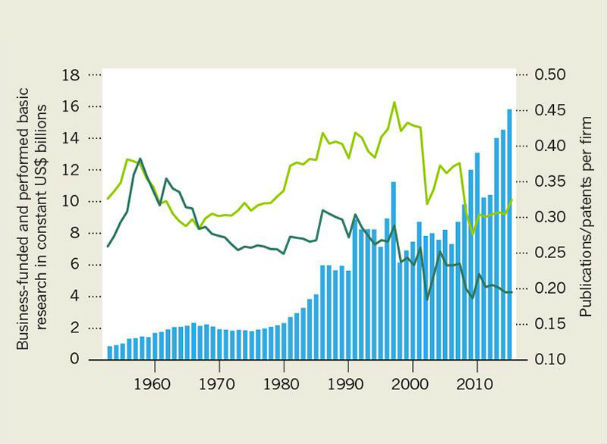 Business-funded and performed research in the United States (see below for full graph).

Many advanced countries struggle to increase their productivity. Between 1970 and 2014, real GDP per hour worked, a measure of labour productivity, grew by an average of just 1.62% per year in the United States, down from 2.82% during the period 1920 to 1970. One suggested reason is that, despite growing investments in research, good ideas are harder to find.

Many sectors have to spend significantly more to merely sustain past levels of innovation. For example, the number of new drugs approved every year by the US Food and Drug Administration between 1970 and 2015 has remained flat despite annual increases in research and development spending (R&D) of 6%.

Accordingly, many large corporations have withdrawn from research, shifting focus to less risky development. But our analysis of scientific publications suggests that life-science firms are defying this trend. Despite declines in R&D productivity, pharmaceutical giants and biotech start-ups continue to publish scientific articles at rates comparable with three decades ago.

We argue that the distinct characteristics of this sector — the commercial potential of discoveries, strong patent protection, and significant support from government — mean that life-science companies are not likely to retreat from research any time soon.

US corporations are undertaking and publishing less science, suggesting that they place less value on research activities. In earlier work, some of us tracked articles in ‘hard science’ journals in the Web of Science database that had at least one author affiliated to a publicly traded US firm.

Between 1980 and 2015, the average number of papers per US firm declined from around 20 to 10. Moreover, the implied value of scientific capability, as measured by stock market valuations, or by the acquisition price in mergers and acquisitions deals of firms with a record of publishing scientific articles, also declined between 1980 and 2006.

Yet firms in the life-science sector are committed to research. Our analysis shows that the average number of publications of life-science firms with more than US$10 million in R&D stock (valued according to R&D expenditures, patents and publications) has declined only marginally compared with the average decline for US firms. Life-science firms have sustained their commitment to research, despite widespread concerns about the viability of the industry.

The annualized return for the New York Stock Exchange Arca Pharmaceutical Index was −1.2% for the period 2 January 2002 to 4 January 2012.

Venture capital did not perform much better, with an average internal rate of return for life science investments of −1% between 2001 and 2010. The profitability of US biotechnology firms, a significant source of innovation, was close to zero from 1975 to 2004, and significantly less than zero if the multinational Amgen is removed from the sample.

So why do corporations in the sector continue to invest in research?

Thus, the returns from investments in research may be higher in the pharmaceutical sector than in other sectors. Moreover, at least partly due to the greater effectiveness of patents, there is also an active market for technology in pharmaceuticals, distinguishing the industry from most others. Biotech companies generate drug candidates that are acquired by large pharmaceutical firms, which, in turn, invest in the use and commercialization of those candidates.

Although large pharmaceutical companies now develop a smaller fraction of their new drugs internally, they still need significant scientific capabilities to be competent buyers of technology. This capacity to identify and ‘absorb’ externally developed drug candidates and research is especially important in the life sciences, where innovation often comes from cutting-edge research.

The commercial applicability of upstream research, such as that conducted in universities and published in scientific journals, is also much more apparent in the pharmaceuticals industry.

For example, in the mid-1990s, 58% of industrial R&D lab managers in the pharmaceuticals industry reported that research conducted in academic or government labs inspired new project ideas, well above the average 32% in the manufacturing industry. Publications by life-science firms also receive 2.5 more citations from patents than publications by non-life-science firms do, again underscoring the higher relevance of research to invention in the sector.

To fully understand the divergent trends in US corporate science, however, one has to consider funding. Federal funding for biomedical research through the National Institutes of Health (NIH) measured in constant 2009 dollars sharply increased from 1980 to 2015.

The increase in federal subsidies for upstream life-sciences research is in stark contrast with federal support for research in any other field of science or engineering.

Large-scale federal projects such as the Human Genome Project often demand that research results are publicly disclosed, meaning that firms that make use of NIH funding are more likely to publish more papers.

Through collaboration with universities and start-ups, NIH funding effectively subsidizes research by firms that, although not directly benefiting from these funds, build on the outcomes of the sponsored research.

The US government provides further incentives for corporations engaging in biomedical research, such as through the 1983 Orphan Drug Act, which allocates generous tax breaks for research and experimentation on rare diseases. In 2008, orphan drugs represented 59% of the total revenues of the six leading biopharmaceutical companies in the country, namely Amgen, Genentech, Gilead Sciences, Genzyme, Biogen Idec and Cephalon.

From 1980 to 2000, publications per firm were also declining among life-science companies. After 2000, however, this time trend reverses, arguably as a result of the sharp increase in federal funding for biomedical research.

Compared to non-life-science companies, publications remain much higher in the life sciences throughout the whole time period, indicating more favourable conditions in this sector for firms to retain, and build, the added value of their research.

Assuming funding for biomedical research remains as high as in the recent past, there is little reason to expect a decline in life-science firms’ participation in such research.

Ashish Arora, Sharon Belenzon, and Wesley Cohen are professors at Duke University and research associates at the National Bureau of Economic Research. Andrea Patacconi is a professor at the University of East Anglia, UK.