Researchers praise the time and funding they are given for deep exploration. 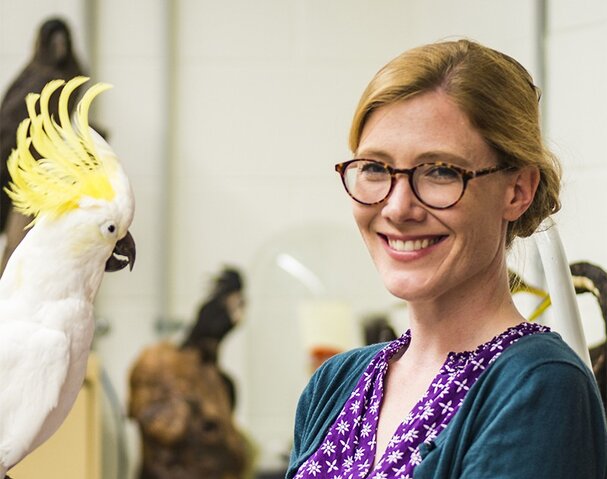 Profound mysteries such as the origins of the Universe and the nature of intelligence are being met with fresh eyes in Germany’s Clusters of Excellence. Launched in 2019 as part of the German government’s Excellence Strategy to bolster its universities’ research and improve their global standing, these interdisciplinary groups receive a total of €385 million (US$455 million) annually for seven years. Four researchers share their experiences within these clusters.

In the grounds of a private castle in Möggingen, southern Germany, Lucy Aplin is studying great tits, delicate songbirds known for their complex social behaviours.

“Great tits are really great social learners,” says Aplin, who has been investigating the species for almost a decade. Curious and gregarious, the birds are eager to explore experimental devices set up for them in the wild.

In 2014, Aplin found that members of a population in Wytham Woods near Oxford, UK, learnt from each other in solving puzzle boxes to access mealworms inside. “They’re really enthusiastic participants,” she says.

Aplin splits her time between her lab at the Max Planck Institute for Animal Behaviour in Radolfzell, a city on Lake Constance where the borders of Germany, Austria and Switzerland meet, and the Centre for the Advanced Study of Collective Behaviour Cluster of Excellence, where she is a group leader.

The cluster is based at the University of Konstanz, Germany’s southernmost university, 23 km from Radolfzell. It brings together biologists, computer scientists, economists and psychologists to understand the different aspects of collective behaviour, such as how cows, sheep and dogs respond to impending earthquakes, and how groups of rats can solve a maze faster than individuals.

Aplin was one of 25 researchers who were brought in when the cluster launched in 2019. Her aim is to uncover the factors that drive the emergence of culture within great tit populations.

Evidence of culture, defined in nature as a behaviour that is learnt by copying another individual and shared by members of a group over time, can be seen in how groups of animals forage, recognize predators and determine migration routes.

An Australian-born scientist, Aplin says one of the biggest advantages of working in Germany is having the freedom to pursue research questions without the pressure of proving immediate impact to gain funding.

“It means you can defend your research very rigorously in terms of how it moves forward our scientific understanding”, she says. “I’ve been encouraged like nowhere else to focus on the blue-sky aspects.” — by Bec Crew

The Higgs boson gives mass to all other fundamental particles in the Universe. But since its discovery in 2012, physicists have been trying to work out why mass varies across different particle types. One step towards answering this is to analyse how the Higgs boson interacts with them.

At the Quantum Universe Cluster of Excellence in Hamburg, principal investigator Elisabetta Gallo and her group are making precise measurements of the elusive particle’s properties. They are comparing these measurements to those predicted by the standard model, a theory that describes all fundamental particles and their relationships with each other.

“It’s the last missing piece of how elementary particles interact in the standard model,” says Gallo, who is also a lead researcher at Universität Hamburg and the German Electron Synchrotron (DESY), a national research centre that develops and operates particle accelerators in Hamburg and Zeuthen, a suburb of Berlin.

In September 2020, Gallo and her colleagues at the Compact Muon Solenoid detector at CERN in Switzerland posted a preprint describing the first evidence of the Higgs boson decaying into a pair of muons — negatively charged particles that are around 200 times heavier than electrons — as predicted by the standard model.

Although previous measurements have focused on the Higgs boson’s interaction with the most massive particles, such as the W and Z bosons, this was the first study to document its interaction with a lighter particle. “This was a very big thing for us,” says Gallo. The study has yet to be peer reviewed.

Gallo is also developing strategies to improve diversity in the Quantum Universe cluster, such as introducing anti-bias training and requiring a minimum number of women on committees.

One of the most rewarding aspects of working in the group, she says, is the opportunity to approach some of the most fundamental questions in physics, such as defining the nature of mass and gravity, with researchers from various disciplines, including mathematics, particle physics, astrophysics and cosmology.

“We look at things from a big-picture perspective, such as how Higgs physics is connected to the start of the Universe,” she says. “That is very inspiring.” — by Gemma Conroy

As a PhD student in the Science of Intelligence Cluster of Excellence, Aravind Battaje is working to identify the fundamental principles that underlie the many forms of biological and artificial intelligence to inform new robotics.

“I want to understand complex, intelligent behaviours, particularly within vision research,” says Battaje, whose focus is building smarter and more robust robots that can better sense and interact with their environment.

A joint project run by Technische Universität Berlin (TU Berlin) and Humboldt University of Berlin, the Science of Intelligence cluster brings together more than 60 researchers with expertise in neuroscience, robotics and behavioural studies.

Working closely with both natural and engineered aspects of intelligence, the team has set in motion a continuous feedback loop, where insights from physiological experiments are fed into artificial intelligence technologies, which create computational models that can be used to better understand phenomena such as social learning, problem-solving and perception.

It’s a new approach to an area of research that has traditionally been fragmented, says Battaje. “In perception research, for example, computer scientists and neuroscientists don’t usually work together.”

Battaje says securing his position within the cluster, based at the Robotics and Biology Laboratory at TU Berlin, was highly competitive. The initial application process took weeks, after which he was flown from the United States to Berlin to complete the final round of interviews and presentations.

He says his experience working with leading automation research teams internationally, at engineering multinational company, Bosch, in Germany and India, and then at the Georgia Institute of Technology in the United States, might have given him an edge over the other candidates.

Returning to Germany to join the Science of Intelligence cluster felt like an important career move, says Battaje, because he “couldn’t find anything like it in the US” that brought together such a diverse team.

“The opportunity to work with researchers from so many fields is hard to get in a traditional setting,” he says. “We use whatever we can to make it work. I like that flexibility. It’s instrumental to me growing as a good researcher.” — by Andy Tay

Life on Earth depends on the delicate balance of microbial communities that are found in nearly every habitat, including the human body. Changes to this equilibrium can have devastating effects, from the undermining of ecosystems to the onset of infectious diseases.

To better predict and prevent such disruption, researchers are investigating the chemical processes that keep these microbial systems in balance.

Janis Fricke is a postdoctoral researcher at the Balance of the Microverse Cluster of Excellence at the Friedrich Schiller University Jena in Thuringia, a state in east-central Germany. He’s studying the microbial communities associated with fungus-growing termites (Macrotermitinae). These termites are known for cultivating ‘fungus gardens’ as a food source.

The termites’ micro-ecosystem harbours symbiotic bacteria that defend the fungus against invasive parasites and pathogens. By pinpointing the molecular processes that stabilize the system, Fricke hopes to identify new natural compounds that could be useful for pharmaceutical or agricultural applications.

As a PhD student at the Leibniz Institute for Natural Product Research and Infection Biology in Jena, Fricke studied the biosynthesis of psilocybin, the naturally occurring psychoactive compound produced by hundreds of mushroom species that is being trialled as an antidepressant.

He says his work in the Balance of the Microverse cluster has allowed him to take a broader view of how microbial communities interact across multiple systems, for example, how bacteria, fungi and viruses propagate within human hosts. “I get to look at the system as a whole,” says Fricke. “It feels like I’m seeing nature as it really is.”

Fricke says the opportunities that have arisen since he joined in April 2020, including free courses, workshops, networking events and mentorship programmes, have been invaluable to his growth as a researcher.

“The support is really helping me,” he says. “That’s the best part of the cluster.” — by Gemma Conroy