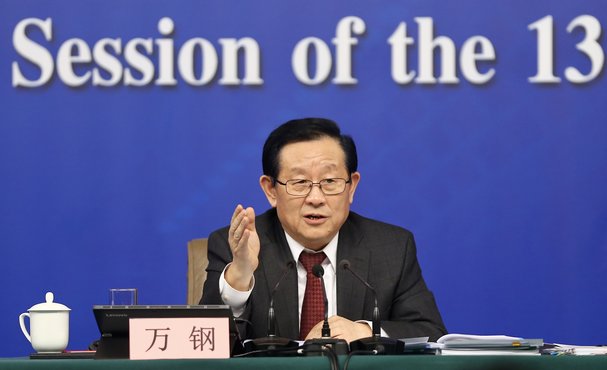 Wan Gang, China's former minister of science and technology at a press conference during the 13th National People's Congress.

China’s move to expand the powers of its science ministry could lead to increased recruitment of international researchers, experts say.

The 13th National People’s Congress in Beijing, which ended on 20 March 2018, passed legislation strengthening the Ministry of Science and Technology (MOST)’s authority in issuing work permits to foreign experts. The decision was part of a broader effort to transform the MOST into a science-policy super-agency.

The MOST absorbed the State Administration of Foreign Experts Affairs (SAFEA), previously under the Ministry of Human Resources and Social Security. MOST also took over the country’s leading basic-research funding agency, the National Natural Science Foundation of China (NSFC), which had functioned as an independent entity.

Placing SAFEA under the MOST will boost foreign scientist recruitment, says Yutao Sun, a science policy analyst at Dalian University of Technology (DUT).

With the MOST’s influence, SAFEA will be better able to understand the needs of international scientists and local restrictions on them, says Sun, though concrete arrangements have not yet been announced. SAFEA's purview currently includes all foreign experts, excluding business elite, but Sun suggests that another newly established entity, the State Immigration Administration, could take over the management of non-scientific experts.

SAFEA, established in 1956, has long been engaged in developing policies to attract foreign talent, as well as managing various state-sponsored programmes, such as the Foreign Expert Recruitment Scheme under the Thousand Talents Plan.

Since the plan was launched in 2008, it has attracted more than 7,600 scientists and senior engineers to China, including 3,500 promising young scientists. However, the majority of transfers were Chinese-born returnees, with only about 390 foreigners.

The plan was launched during a period of financial crisis in the West to bring senior professors from leading international universities to China. The central government offered candidates 1 million yuan (US$158,000) and salaries comparable with those in the United States. In 2012, the Thousand Talents Plan was expanded to include a programme targeting postdoctoral researchers and assistant professors up to the age of 40.

“If China wants to achieve global leadership in science, it must not only attract overseas Chinese, but also recruit international scientists,” says Xiao-Fan Wang, a pharmacologist and cancer biologist at Duke University in North Carolina, who has advised Chinese policymakers on science and technology talent policies.

This is an opportune time for China to step up its support, says Wang, as funding for young researchers in the US and other Western countries is decreasing.

But foreign scientists in China continue to face many barriers. Without a Chinese co-investigator, they can only apply for standard NSFC grants of about 600,000 yuan (US$94,600) for three to five years. These are much smaller than the state key research programme grants managed by the MOST, which can amount to several million yuan.

Visa policies are also a limiting factor. In 2016, China issued only 1,576 green cards, or permanent residencies, to foreigners (not just scientists). Even though this figure represented a 163% increase from the previous year, it was dwarfed by the US release of 1.18 million green cards in 2016.

In a further bid to open its borders to more foreign talent, SAFEA, together with the Ministry of Foreign Affairs and the Ministry of Public Security, introduced the R visa in January 2018. Foreign experts whose skills are in high demand can apply for the visa, at no cost, with the promise of quick approval, and up to 10 years allowing multiple entry into the country.

Richard de Grijs, a Dutch scientist who worked at the Kavli Institute for Astronomy and Astrophysics, Peking University, for several years until the end of 2017, believes the funding situation for international researchers will improve. “The Chinese government seems keen to attract foreign talent, so it’s probably only a matter of time before MOST will start to accept proposals in English for their less prestigious programmes.” The majority of grants currently only accept applications in Mandarin.