Chemistry is the fastest path to a Nobel prize

Sorry, economists. A new study pinpoints the age at which Nobel Laureates produce their transformative work. 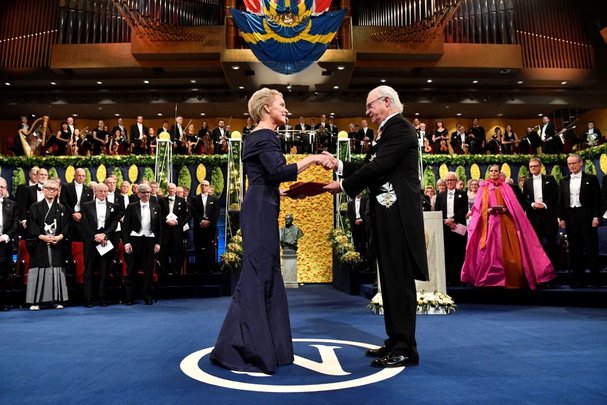 Not all paths to becoming a Nobel Laureate are equal. A new study suggests that a researcher’s field can play into both the age at which they conduct their prize-winning work, and how long they wait to have it recognised.

While physicists make their biggest discoveries in their youth, they wait more than two decades, on average, to win the coveted prize. The opposite is true for chemists, who produce their Nobel-winning work later in life, but have the shortest wait to win.

Rasmus Bjørk, a physicist at the Technical University of Denmark, calculated the ages of 178 Nobel Laureates in physics, chemistry, economics, and physiology or medicine, seeking trends in their paths to success.

Bjørk’s analysis relied on official information from the Nobel Foundation’s Advanced Information document, which includes the scientific background of each prize awarded and references to key papers cited by the Foundation.

The document has been published since 1995 for physics and economics, since 2000 for chemistry, and since 2006 for physiology or medicine.

Bjork found that the average Nobel Laureate conducts their prize-winning work at age 44, and wins the prize at 59. Physicists are the youngest group in the dataset, making their breakthrough discoveries around the age of 42, followed by economics and physiology/medicine laureates, at the early- to mid-forties. Prize-winners in chemistry are the latest bloomers, publishing their Nobel-worthy research in their mid- to late-forties.

Chemists might take the longest to make their biggest discovery, but they enjoy the shortest wait of all prize-winners included in the analysis: an average of two decades from discovery to win. Medical scientists are not far behind, averaging a wait of around 21 years, and the average wait for economists and physicists is 23 and 23.5 years, respectively.

The question of how many papers makes a prize-winner comes down to discipline.

Bjørk says this could indicate how physicists tend to be awarded based on a single breakthrough that can occur relatively early on in their career, while economists must develop a new theory over many years before being considered for the top prize.

Compared with their predecessors, today's Nobel Laureates are all late developers, regardless of discipline. The average laureate is 5.5 years older when they produce their most innovative work than the average winner was in the first half of the 20th century.

Bjørk suggests that scientists are spending more time juggling other academic tasks, such as writing grant applications and meeting their teaching duties. “This slows down their progress in research,” he says.