Japan: can it stop the decline? 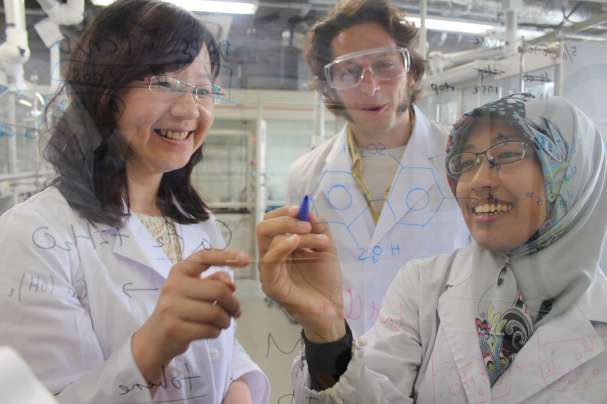 Researchers at the I2CNER at Kyushu University.

While Japan ranked fifth in the Nature Index in 2015, the country’s performance in the database of the world’s best natural science research is slipping. Since 2012, the proportion of Japanese contributions to papers in 68 high-impact journals included in the index — its weighted fractional count (WFC) — has fallen 12%. The performances of research powerhouse the United States has also declined.

After decades of keeping universities insular, Japan has realized that diversity and collaboration are essential to producing world-class science and research. To revive Japan’s academic competitiveness, the Ministry of Education, Culture, Sports, Science and Technology (MEXT) has been pushing its higher education sector to attract more foreign staff and students. Simultaneously, it has been implementing reforms to make its research environment more competitive with the best research universities in the world. “Internationalization changes the internal structure of universities, which makes them more flexible and on par with global norms,” says Petros Sofronis, director of the WPI (World Premier International Research Center Initiative) International Institute for Carbon-Neutral Energy Research (I2CNER) at Kyushu University.“The Japanese government is doing the right thing,” says Sofronis.

But many policy analysts and senior researchers say these efforts aren’t enough. They say more reforms are needed to allow research institutions and universities to make decisions about their own structure. “If the government is really determined to raise the level of globalization, current strategies are insufficient,” says Hiroshi Nagano, visiting fellow at the Japan Science and Technology Agency, who is a specialist in international science polices.

For more than a decade, the Japanese government has tightened its annual budget for science amid the country’s weak economy and growing social welfare demands. The 2016 budget for science and technology is set at 3.45 trillion yen, down 6.4% from its peak in 2012.The government’s R&D investment accounted for 19.5% of the country’s total R&D spend in 2013, the lowest among major countries including China, South Korea and the United States. The president of Suzuka University of Medi-cal Sciences, Nagayasu Toyoda, who observes Japanese science policies closely, says the effect has been “deteriorated support for fundamental research activities, the foundation of our country’s strength.”And while the Japanese government, since 2005, has increased the value of competitive grants awarded to scientists for research pro-jects, it has slashed the key funding pool that national universities and research institutions rely on to make themselves more competitive, known as Management Expenses Grants. It’s not just within the Nature Index that Japan’s ranking has slipped. According to a recent report by the National Institute of Sci-ence and Technology Policy (NISTEP), the number of Japanese papers cited in the top 1% of all journal articles published between 2011 and 2013 fell to seventh in the world, down from fourth a decade ago.

The Japanese government’s efforts to open up higher education are not new, but they have accelerated in the past few years. While the budget for science and technology has fallen, the money available for higher education institutions to globalize has surged from 1.9 billion yen in 2006 to 9.34 billion yen in 2016. Between 2009 and 2013, the MEXT established the Global 30 project, funding 13 leading universities to create degree courses in English that would attract foreign students amid intensifying recruitment competition with other countries. As the number of courses taught in English at these universities grew from a hand-ful in 2009 to more than 300 now, the number of overall overseas students grew from 23,083 in 2009 to more than 28,000 by 2013, including those enrolled at short-term programmes and other non-Global 30 courses. But this modest increase in international students cost Japanese taxpayers 14.7 billion yen over five years, and by 2013 the country’s percentage of for-eign students, 3.4%, remained well below the OECD average of 9%.

While the Global 30 project succeeded in increasing the number of university courses offered in English, the MEXT launched another programmeme in 2014 to catapult more Japanese universities into the world’s top 100 institutions. The Top Global University Project, often referred to as the Super Global University programmeme, funds 37 universities to change their organizational structures, partly to deepen ties with international insti-tutes. Thirteen ‘Type A’ universities — many of which are among the top ten institutions in the Nature Index in Japan in 2015 — will receive up to 500 million yen a year until 2023 to become a top 100 university in rankings such as the Times Higher Education list. Many Type A members are striving to create joint degrees with top-level overseas institu-tions. In April 2015, Tohoku University established the world’s first graduate programme in spintronics in collaboration with Johannes Gutenberg-Universität Mainz. The spintronics course fits with Japan’s strength in physical sciences, evidence of which is seen in the Nature Index.

Another 24 ‘Type B’ institutions will be given up to 300 million yen to use their unique strengths to contribute to local economies. Perhaps Japan’s most successful pro-gramme to promote internationalization is the WPI, which launched in 2007 and comprises nine institutes. The official language of these centres is English and an average 40% of researchers are from abroad. WPI institutes accounted for 4.63% of the world’s most highly cited papers between 2007 and 2013, the third largest contribution after the Rockefeller University and the Massachusetts Institute of Technology (MIT). But the executive director of RIKEN, Yoichiro Matsumoto, says there are few indica-tors to assess the success of these programme. “The government evaluates the impact of pro-grammes like Global 30 only by numbers. But we have to create new measures to assess how universities bring competitive personnel into the global society,” says Matsumoto.

Charles Yokoyama, director of research administration at the RIKEN’s Brain Science Institute (BSI), says that despite Japan’s efforts to attract overseas staff and students, it’s hard for the country to keep up. “Globalization activities are slower than they can or should be to keep up with global competition,” he says. The RIKEN BSI is one of the most international institutions in Japan yet only a few postdocs are trained, or awarded faculty positions at elite US universities. The pool of talented researchers largely bypasses Japan, says Yokoyama. Hiring excellent researchers is key to attracting top-level students from abroad, but “Japan can be no match for the United States and other major countries so far in terms of the level of salaries and welfare packages for families,” adds Takaaki Kajita, director of the Institute for Cosmic Ray Research at the University of Tokyo. While Japan may struggle to compete with other nations in terms of recruitment, Japanese researchers are reaching out to partner with their global peers. Between 2014 and 2015, Japan’s collaborations with China, the United Kingdom, France and Germany grew. Its partnerships with the United States also increased, an upsurge to a three-year decline.

Shizuo Akira, director of the WPI Immunology Frontier Research Center at Osaka University, says many young Japanese researchers are unwilling to move labs or go abroad for postdoc positions and miss opportunities to learn from different leaders. Akira, one of the world’s most cited immunologists, says young Japanese researchers are reluctant to move as competition for positions in Japan is intense after returning from abroad. “Unless we establish a practical career path that presents young fellows as visibly prominent scientists on the global stage, there is little hope for the future of Japanese science.”

The government is aware of these issues and is implementing various measures to strengthen ties with overseas collaborators. The MEXT is in the process of revising Japan’s biggest competitive grant, the Grants-in-Aid for Scientific Research, so it can provide greater support for joint international research. In addition, the ministry set aside 5.6 billion yen this year to accelerate intellectual exchange, allowing about 520 young Japanese researchers to work abroad for two years, and 1,100 overseas researchers to come to Japan.

But Nagano worries these measures are relatively small due to the government’s tight science budget, and many have not led to a rise in Japan’s rankings. “If Japan wants to raise its global ranking, we need to recruit good students. To do that, we need good faculty. But there are no measures that combine these two points,” he says.