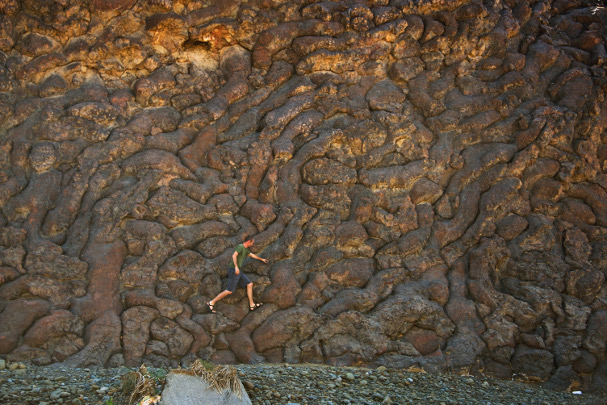 Chris Spencer of Curtin University at the basalt outcrop of the Semail Ophiolite in Wadi Jizzi, Oman.

Represented are institutions from the east and west coast.

Of the three institutions, Curtin experienced the highest percentage increase (82.59%) in its weighted fractional count, WFC, which is a measure of the university's contribution to 68 top natural science journals in the index.

The state of Western Australia has two distinguishing qualities: it is rich in mineral resources and its interior is sparsely populated. Both factors feed into Curtin University's focus on Earth sciences.

A decade ago, the university, located in Perth, reorganized its mining school to incorporate key aspects of applied geology, says Graeme Wright, Curtin's deputy vice-chancellor for research. Wright cites this transformation as the key to the 54% increase in Curtin's contribution to articles in Earth and environmental sciences in the index since 2012.

Western Australia's vast, people-free interior also makes it among the most radio-quiet places on the planet and an ideal site for the Square Kilometre Array (SKA), an internationally funded next-generation radio telescope, scheduled to be fully operational in 2030. The SKA will peer deeper into the universe than ever before and help answer questions about how stars, galaxies and the universe formed and evolved. The state's 'pathfinder' radio telescopes are already boosting Curtin's physical sciences index score. “From small beginnings, we built a strong radioastronomy group,” says Wright.

For Wright, the key to Curtin's index success is its collaborations. “We are a modestly-sized university. We know we've got great people, but that there are even better people outside. That's key to what we do.”