Vaccination is picking up where screening left off to reduce the incidence of one of the most common cancers in women. 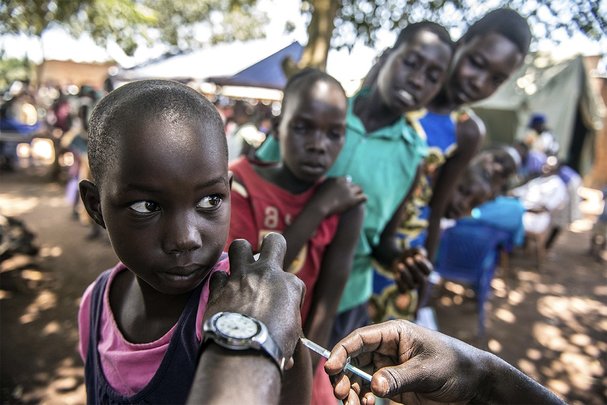 Cervical cancer is already a prevention success story. The widespread use of the Pap smear, a screening test to identify pre-cancerous and cancerous cells collected from the cervix, has led to steep declines in diagnoses and deaths from cervical cancer over the past half-century, especially in high-income countries.

Cervical cancer is still one of the most common cancers in women, so the World Health Organization (WHO) has an ambitious goal: to eliminate it as a public health problem. Its World Health Assembly plans to vote on a strategy to put all countries on a path to cervical cancer elimination by 2030.

Since 2006, the HPV vaccine has achieved further stunning results in cervical cancer prevention. For example, in England, where a national vaccination programme for adolescent girls began in 2008 and expanded to include boys last year, public health officials revealed in January 2020 that less than 2% of sexually active young women tested in 2014 to 2018 carried HPV strains 16 and 18.

Those strains significantly increase the risk of cervical cancer and are responsible for 70% of cases. The results are “very impressive”, says Lois Ramondetta, a gynaecologic oncologist at the MD Anderson Cancer Center in Houston, Texas, which is ranked fourth in the Nature Index for cancer research output.

“It’s more evidence for how effective the vaccine is, as well as for the important concept of herd immunity.” Herd immunity is the idea that high vaccination rates can virtually eliminate the virus at a population level.

To epidemiologists and public health officials, ‘eliminate’ has a specific definition: fewer than 4 new cases per 100,000 women per year. The current global rate stands at 13.1 per 100,000; more than 80% of diagnoses and deaths occur in low- and middle-income countries.

Reaching that benchmark depends on both vaccinating adolescent girls and screening adult women. But as far as screening goes, the Pap tests that have been key to reducing the burden of cervical cancer may play a relatively small role going forward.

HPV testing replaced the Pap smear in Australia in December 2017 and the US Preventive Services Task Force recommended the test, alone or in combination with Pap smears, in 2018. Many women in low- and middle-income countries lack access to any form of cervical cancer screening, but public health researchers are investigating how to roll out HPV testing programmes in these settings.

But reaching the benchmark of elimination in Australia and elsewhere does not mean inequities will be removed, she cautions. Cervical cancer rates are twice as high, and deaths three times as frequent, among Aboriginal women in Australia compared to non-Aboriginal women.

According to the US Centers for Disease Control and Prevention, cervical cancer rates are higher in some populations, including black and Hispanic women, as well as women living in the south, than in the United States as a whole.

Shastri has worked on studies of several alternative approaches to cervical cancer screening in India, where laboratory facilities and trained pathologists who can interpret Pap smears are scarce outside large cities.

He and his colleagues have shown that a test known as VIA, in which the cervix is coated with acetic acid and then inspected for white areas that may signify cancer or precancerous lesions, can be performed by community health workers and reduces cervical cancer mortality.

Self-sampling, in which women swab their own cervical tissue for HPV testing, could help to increase access to cervical cancer screening in areas where women’s health specialists and facilities for pelvic exams are inadequate.

“Being able to offer women a self-collected test has opened up a lot more options for when and where they can be screened,” says Megan Huchko, a gynaecologist and director of the Center for Global Reproductive Health at Duke University in Durham, North Carolina, ranked 28th in the Nature Index for cancer research.

For example, Huchko and her colleagues working in East Africa have had success in offering the screening to women at community health fairs and door-to-door visits by health-care workers; women often receive their results by text message.

These strategies can increase screening coverage from 5% to as much as 70%, they have found. However, the low-cost HPV tests that are currently available don’t pinpoint the highest risk strains of the virus, so some women may be receiving unnecessary treatment for medium-risk strains, Huchko says.

In high-income countries, the HPV vaccine can cost as much as US$100 per dose (at least two doses are needed for full protection). Gavi, a global public–private partnership to increase vaccine accessibility, has helped 27 countries access the vaccine for as little as $4.50 per dose.

The advent of HPV vaccines produced more cheaply in middle-income countries such as China and India and shipped around the world will also reduce costs — the first such vaccine was approved in China at the end of 2019. But, Shastri cautions, “It’s not just about providing the vaccines. There are a whole lot of logistics that go into the vaccine delivery.”

Vaccine hesitancy is common in the United States, and it hasn’t helped that the HPV vaccine is associated with the issue of young women’s sexuality. The vaccine was originally advertised as an anti-STD for girls rather than an anti-cancer vaccine, Ramondetta says. That led to reluctance by government officials to mandate the vaccine, especially in conservative states, out of fear that it would promote promiscuity.

In addition, gynaecologists were initially responsible for delivering the vaccine, when most girls of the appropriate age would still be cared for by paediatricians. Still, Ramondetta says, vaccination rates in the United States “continue to go up every year, which is pretty amazing”.