Worth the cost? A closer look at the da Vinci robot’s impact on prostate cancer surgery

The da Vinci robotic system has become the ubiquitous method for prostate removal, but its cost and long-term outcomes for patients are raising questions. 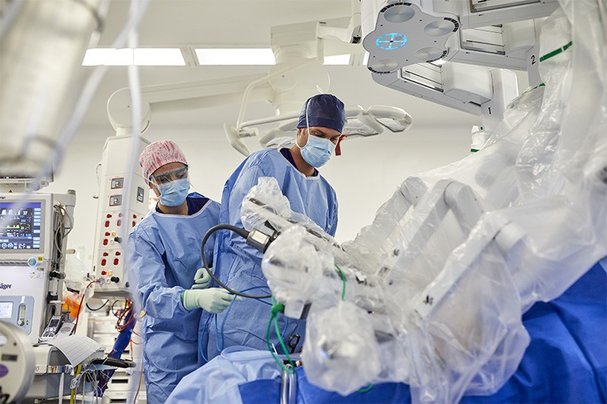 There are more than 5,500 da Vinci robots globally, manufactured by California-based tech giant, Intuitive. The system is used in a range of surgical procedures, but its biggest impact has been in urology, where it has a market monopoly on robot-assisted radical prostatectomies (RARP), the removal of the prostate and surrounding tissues to treat localized cancer.

Uptake in the United States, Europe, Australia, China and Japan for performing this procedure has been rapid. In 2003, less than 1% of surgeons in the US performed a RARP in preference to open or laparoscopic surgery.

By 2014, RARP accounted for up to 90% of radical prostatectomies across the country. When it comes to prostate cancer surgery in the United States, says Benjamin Davies, surgeon and professor of urology at the University of Pittsburgh, “the die is cast; there is only robotic surgery”.

After lung cancer, prostate cancer is the second most common cancer in men worldwide. It affects the walnut-sized prostate gland, which sits up against the urethra, between the rectum and bladder, and secretes prostate fluid, a component of semen.

The prostate’s proximity to the blood vessels, muscles and a fragile web of nerve bundles that control erectile and bladder function, demands extreme surgical precision in its removal, a procedure that is generally recommended if the disease has not yet spread. Whereas an open patient needs to be cut from naval to pubic bone in order to access the prostate, a robot-assisted procedure requires a few small abdominal incisions.

Whether these improvements translate to better long-term outcomes for the patient, however, remains unclear. Ruban Thanigasalam, associate professor of robotic surgery at The University of Sydney and clinical lead in prostate cancer research at the Institute of Academic Surgery in Australia, is conducting a trial comparing open and robotic surgery.

The preliminary results support what has been widely accepted by surgeons for years: robotic-surgery patients experience reduced blood loss, less pain and shorter recovery time, but the longer-term outcomes are equivalent.

Even da Vinci’s proponents acknowledge the temptation to overplay its ability. “We all love a good robot,” says Richard Sullivan, professor of cancer and global health at King’s College London and director of the Institute of Cancer Policy in the United Kingdom.

“Human beings, particularly surgeons, are incredibly neophilic. We love this sort of thing, it gives us authority. And the patient will think that, because you’ve got all of this fancy kit, you must have better outcomes. But that’s not true, the robot is not an indicator of quality.”

Despite questions over value for money, business is booming. In 2018, the global surgical robots market was worth US$6.8 billion, and it’s predicted to hit $17 billion by 2025.

In response to the surge in robotic surgery, the US Food and Drug Administration (FDA) urged patients and health-care providers to exercise caution last year, particularly with regards to breast and cervical cancer, citing a lack of long-term evidence. “The problem is, once it becomes adopted, it can be very difficult to pedal it back,” says Hamdy.

A 2019 paper co-authored by Sullivan for the World Health Organization found that competition between hospitals with and without surgical robots contributed to the closure of 25% of radical prostatectomy centres in the English National Health Service.

This focus on “expensive medicines for wealthy patients in wealthy countries”, the paper states, is putting low-income groups at a disadvantage by crowding out spending on the development of preventative measures (R. Sullivan and A. Aggarwal in Reducing Social Inequalities in Cancer: Evidence and Priorities for Research, IARC Monograph, 2019).

Improved screening could see fewer men undergoing surgery in the first place. There is evidence that the benefits of the prostate-specific antigen (PSA) blood test, which, along with a digital rectal examination, is the most common way to screen for prostate cancer, may not outweigh the potential harm of misdiagnosis leading to unnecessary surgery or radiation.

Researchers from the Queen Mary University of London and University of East Anglia, UK, are developing blood and urine tests to be used in conjunction with the PSA.