The ‘Goldilocks’ genes that need to be just right 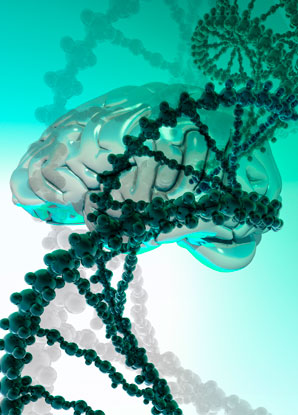 Genes that don’t tolerate change are likely to cause a wide variety of disorders, including epilepsy and autism.

Over the course of human history, the genes that make us unique have undergone continuous changes. Sometimes entire regions of the genome have been duplicated or deleted, meaning that people may have more than one copy – or no copies – of any given gene.

While changes in the number of copies of a gene may often have no discernible effects on the body, researchers at Trinity College Dublin have demonstrated that a small group of genes are strongly affected by changes in copy number, resulting in diseases such as schizophrenia, autism spectrum disorders and epilepsy. Aoife McLysaght and Alan Rice at the Smurfit Institute of Genetics focussed on ‘copy number variants’, or CNVs; large regions of the genome that are duplicated or deleted in certain individuals, and have been implicated in many debilitating conditions.

Perhaps counter-intuitively, the researchers began by searching through human and mammalian genomes for genes on pathogenic CNVs that did not display changes in copy number.

“We looked for genes where duplication and deletion doesn’t happen, that is, genes that are exactly 1:1 across all the animals that we looked at,” says McLysaght. “The logic is that any gene that causes a disease when it is duplicated or lost should have characteristic patterns of evolution, namely a dearth of duplications and loss events over long evolutionary times.” In other words, those individuals who experienced changes in numbers of those genes did not survive to reproduce and contribute to the existing genetic lines that we can observe.

McLysaght and Rice discovered that pathogenic CNVs incorporated more of these conserved genes than benign CNVs, and that many of them were developmental genes. This suggests that these genes are ‘dose-sensitive’ — if there is too much or too little of this gene on a pathogenic CNV, it can trigger disease. For this reason, the researchers named their discoveries ‘Goldilocks genes’.

“We believe that some finely-balanced cell processes become disrupted by these incorrect quantities of genes,” says McLysaght. “It's a bit like skating — your two feet need to go at the same speed as each other, if not you fall over. If you have too much of one gene it's as if one foot is going faster than the other, so your body cannot cope.”

The researchers showed that disruption to Goldilocks genes can affect the development of anatomical structure and neurological function. They narrowed the list of Goldilocks genes likely to cause disease down to 199, giving scientists direct targets for future investigations.