Taking the pressure off gas storage 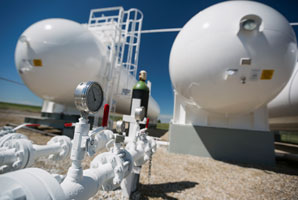 Unlike a sponge, which immediately springs back into shape after a thorough squeeze, materials that exhibit the ‘shape memory effect’, such as clay and most metals, remain deformed until a new force is applied. If porous materials experienced this effect, they could be used to capture, store and release gases without the risk of leakage, but this has been difficult to achieve.

Now, an international team which included researchers from the University of Limerick, have made a metal organic framework (MOF), a scaffold of metal clusters held together by organic molecules, that can absorb and release a range of gases without losing form.

“Of the 25,000 MOFs out there, only about 130 can ‘breathe’ in and out”, says Michael Zaworotko, of The University of Limerick, “and just one of those has ever held its breath, but only under a narrow range of conditions”.

To make their MOF, the team, which included researchers from Ireland, Japan and the USA, dissolved a concoction of chemicals in a common solvent at 120°C for 24 hours. This created crystals with an internal structure of interlaced lattices, shaped like paddlewheels, of zinc particles surrounded by organic molecules. At this stage, the crystals had a porosity of 46 per cent — meaning that 46 per cent of its volume was free to host ‘guest’ molecules — but it was not quite ready to take its first breath.

The researchers then heated the crystals at 130°C in a vacuum for 12 hours. This created crystals in which the paddlewheels were even more distorted and the porosity had shrunk to 15 per cent. They then added carbon dioxide (CO2) to the crystal at -78°C. The guest gas filled the gaps, the paddlewheels became less distorted again, and the porosity rose to 34 per cent. This final stage locked the lattices in place and the crystal ‘held its breath’, retaining its open structure even after taking in and releasing CO2 ten times. “When the structure inhales,” Zaworotko explained, “it is both more open and less strained, yet there is more attraction between the molecules because of the interlaced lattices.”

The team repeated their experiment with nitrogen and carbon monoxide instead of CO2, adjusting the temperature to achieve similarly stable results. The crystals could be switched back to their previous states by heating them in a vacuum or soaking them in a solution, just as before.

“We now have a reliable recipe for making flexible breathing materials, and at low pressure,” says Zaworotko, “and this could lead to safer storage and transport of gases such as methane and hydrogen.”

The next challenge is to make these materials recyclable. “It’s really the energy efficient, safe storage of natural gas that we are after, so these materials need to be stable for thousands of cycles”.