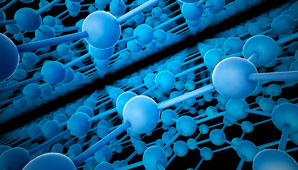 Two hundred times stronger than steel, yet highly flexible with unique electronic properties, the carbon-based material, graphene, is one of the most exciting discoveries of recent decades. Now, researchers at Trinity College Dublin, in Ireland, have integrated tiny flakes of graphene into polysilicone — commonly known as the ‘silly putty’ played with by children — creating flexible sensors with many potential applications, such as blood pressure monitoring.

“Many scientists, including myself, have explored the idea of adding graphene to elastic polymers to make sensors, with varying degrees of success,” says Conor Boland, who worked on the project with Jonathan Coleman and other Trinity colleagues, in collaboration with scientists from the University of Manchester in the UK. “I wanted to make something different; a composite that was mouldable and self-adhering, and silly putty came to mind as a base material. I was surprised that no-one else had used such low viscosity polymers to make sensors before.”

Boland began by making his own version of silly putty using silicone oil and boric acid, before mixing tiny nanoscale flakes of graphene into the putty. The researchers discovered that the graphene flakes arranged themselves into a dense but uniform network inside the ‘G-Putty’, creating a malleable material with high electrical conductivity.

“I expected to see the basic mechanical properties such as stretchiness and flexibility,” says Boland. “But what truly amazed us were the sensing properties of G-Putty, which are created by the high mobility of the flakes inside the putty when the material deforms.”

When G-Putty is deformed under pressure, the graphene network breaks, significantly increasing the material’s electrical resistance. The network rapidly heals itself when the pressure is removed and the flakes return to their original orientation, thus returning resistance to its initial value. Monitoring these resistance changes allowed the researchers to take highly sensitive measurements such as tracing the footsteps of a small spider walking across the G-Putty.

Boland placed a G-Putty sensor on his own neck and accurately measured his blood pressure from his pulse. In fact, the sensor is so sensitive it could even be used to monitor joint motion or a baby’s breathing.

“G-Putty’s niche lies in medical applications and we are pursuing various avenues to use it in future sensing,” says Boland. “However, I could also see G-Putty or similar soft sensors being used in robotics for artificial sense of touch, for example. For now, we are focusing on scaling-up and optimizing G-Putty using advanced modelling. I am also investigating the potential of other low viscosity elastic polymers for sensing applications.”