Spreading the seed: DNA reveals a different route to agriculture for Baltic states 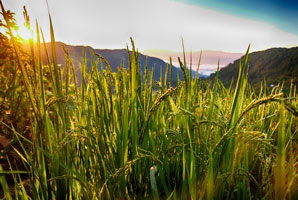 Agriculture in the Baltics evolved by example, not interbreeding.

Communities across Europe went through significant cultural transition during the Neolithic period, moving from hunter-gatherer lifestyles to a settled, agricultural-based existence. The new patterns, which originated in the Near East around 11,500 years ago, were brought to Central and Western Europe by the migrating Levantine and Anatolian people.

Now, a study conducted by an international team of scientists using DNA from Neolithic remains suggests that the Baltic peoples did not inherit agricultural skills through interbreeding with near-eastern migrants as the rest of Europe did. Rather, they adopted the skills, along with pottery making, through the gradual sharing of ideas with outside communities.

“In central Europe, pottery and agriculture — the hallmarks of the Neolithic transition — arrived as a package from the Near East,” says Eppie Jones, who worked on the project with colleague, Daniel Bradley, at Trinity College Dublin, and co-workers across Europe. “In the Baltic and the Ukraine, however, ceramics appeared first, with the spread of agriculture occurring much later.”

To investigate the reasons for these differences, Jones and team extracted DNA samples from eight Neolithic skulls — six from Latvia and two from the Ukraine, dated between 8,300 to 4,800 years old.

Jones describes the process: “One of the big challenges of working with ancient samples is that DNA tends to be poorly preserved because it degrades over time. We previously found that a part of the temporal bone, called the petrous, is a haven for DNA in ancient remains. By sampling the petrous we recovered genome-wide information for our study.”

The researchers were surprised to discover that the genetics of the Baltic peoples was unchanged from their hunter-gatherer ancestors until the end of the Neolithic period. There were no genetic traces of the Levantine or Anatolian farmers that are seen across the rest of Europe. This suggests that agricultural practices and the methods of making ceramics must have spread by word-of-mouth through the Baltic rather than by direct inheritance.

One of the later Latvian samples in the study did show genetic influence from another source, the Pontic Steppe in the East. “We found Steppe-related genetic ancestry arriving at around the time of the proposed origins of Balto-Slavic languages,” says Jones. “It is thought that Indo-European languages evolved on the Steppe; the Steppe ancestry in our sample supports this origin for at least the Balto-Slavic branch of Indo-European languages.”

Jones’ team plan to continue investigating the complex reasons for the spread of agriculture in the Baltic, which may include climate-related factors.