Relative demographic susceptibility does not explain the extinction chronology of Sahul's megafauna. 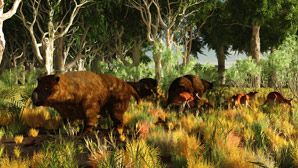 The extinctions of large ancient animals and birds from the combined landmass of Australia and New Guinea around 30,000 to 50,000 years ago appear to have occurred haphazardly, rather than having a single clear cause such as hunting.

Megafauna species such as the large flightless bird Genyornis, the wombat-like Diprotodon and kangaroo ancestor Procoptodon disappeared from the ancient continent of Sahul during the Late Pleistocene period, but the cause of these extinctions has been unclear.

Now, a team led by researchers from Flinders University in South Australia has examined various scenarios that might have caused a species to become extinct.

This analysis was based on features such as the species size, adaptability, and the time between generations, to see which fit best with what is known about when and how these species vanished.

The team found that no one scenario explained the pattern of extinctions.