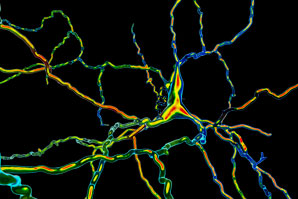 A newly discovered firing pattern of dopamine neurons in monkeys is used to evaluate rewards that vary continuously with time.

Sometimes dubbed the pleasure neurotransmitter, dopamine is a powerful neurotransmitter that plays a key role in influencing decisions. Dopamine neurons in the midbrain of an animal fire in short, sporadic pulses in anticipation of an imminent reward. But this kind of firing seems inappropriate for rewards that change moment to moment such as when heaping food onto a dog’s bowl.

Now, five researchers, all at the University of Tsukuba in Japan, have discovered a new firing pattern of dopamine neurons in two monkeys when they used colour coding to indicate a gradual increasing or decreasing level of a drink reward.

The firing pattern they observed was more sustained than the previously observed sporadic firing, making it more appropriate for evaluating rewards that change from moment to moment.