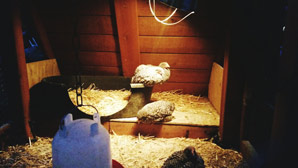 Exposure to light during the night can jeopardize the long-term survival of nerve cells in the developing brain.

To determine how light at night affects the brain in early life, a Waseda University–led team studied chickens, which, like people, are active during the day and sleep at night.

The researchers reared young chicks in 12 hours of light followed by 12 hours of darkness. They saw that a small gland deep in the brain produced a steroid hormone with expression levels that peaked about four hours into the dark cycle.

However, this hormone release was disrupted in chicks raised either in constant light or just with an extra hour of light interrupting the dark cycle. Absence of the hormone resulted in the death of nerve cells needed for proper motor coordination and cognition.

Artificial light exposure may have similar negative effects on the development of the human brain, the researchers caution.