Biophysical properties of single rotavirus particles account for the functions of protein shells in a multilayered virus. 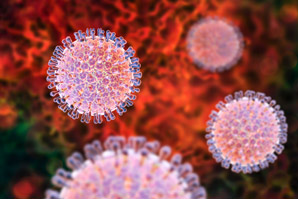 Rotavirus particles have a three-layer protective casing that helps the diarrhoea-causing pathogen survive and infect cells.

A new biophysical analysis — conducted by scientists from the Spanish National Research Council and other institutions in Spain — shows how the concentric shells work, and suggests ways to weaken structural defences of the virus to combat nasty infections.

The researchers used powerful microscopes to probe the mechanical properties of the onion-like layers that surround the rotavirus genome.

They showed that the stiff outer layer helps protect against the hazards of the human gut. The thick, soft middle layer cushions against deformation, while the innermost layer helps facilitate the over structure.

Everything is then stabilized through the binding of calcium ions, which dissociate when needed to allow expression of the viral genome contained within the multilayered shield.