The Co-evolution of Disks and Stars in Embedded Stages: The Case of the Very-low-mass Protostar IRAS 15398–3359 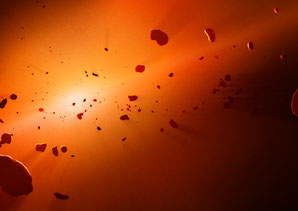 The precursors for planets could form around new stars earlier than previously thought.

Protoplanetary disks are rings of gas and dust that swirl around newly formed stars, eventually clumping into planets.

Now, a team including researchers from the University of Tsukuba has used the Atacama Large Millimeter/submillimeter Array (ALMA) telescope in Chile to study a small protostar, which is shrouded in a dust cloud.

Their observations revealed a dense rotating disk of gas and dust, not previously seen around such a young star. From the disk’s rotation speed, the team calculated the star’s mass to be a mere 0.7% that of the Sun — the lowest mass yet reported for a protostar, although it is expected to gain more material from the disk over time.

Understanding when and how planetary disks form could improve models of the birth of our Solar System.