FIRST DETECTION OF GAS-PHASE METHANOL IN A PROTOPLANETARY DISK 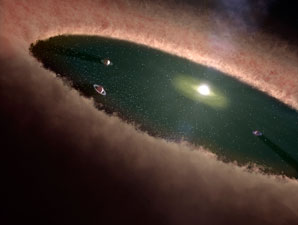 Methanol, an organic molecule, has been detected for the first time in a gaseous form around a young, nearby star.

An international team, including a University of Tsukuba researcher, used observations from the Atacama Large Millimetre Array (ALMA), the world’s most powerful telescope, and analyzed microwave emissions coming from the vicinity of a 10-million-year-old star similar to our own Sun. The authors detected a ring of methanol gas around the star which shines just 175 light-years away in the constellation of Hydra (the sea serpent). Methanol molecules form on the icy coatings of dust grains in space, so the authors were able to pinpoint the gas to the region where ice-coated dust collides to form comets that could one day become planets.

The presence of methanol in a planet-forming disc can provide insight into how complex organic compounds, potentially the precursors for life, are incorporated into young planetary systems, the authors say.