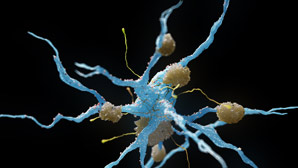 An aggregate-forming protein implicated in various neurodegenerative diseases forms fibrils in solution, suggesting it has a natural tendency to arrange into fibrils over a wide range of conditions.

Many neurodegenerative disorders, including Alzheimer’s and Parkinson’s diseases, involve aggregates such as fibrils formed by misfolded proteins known as prion-like proteins. These proteins can confer their abnormal structure to adjacent proteins, resulting in the spread of aggregates in the brain.

Now, a team led by scientists from the Spanish National Research Council has found that one such prion-like protein called TDP-43 forms droplets when put in a solution of pH 4. They also observed visual evidence for the formation of fibrils at the surfaces of these droplets but not in their interiors.

Since these observations were made in the absence of salts or RNAs, they suggest that TDP-43 can form aggregates over a wide range of conditions without any external inducement.