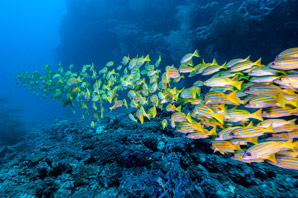 Ocean acidification caused by higher concentrations of carbon dioxide in the atmosphere dissolving in seawater may benefit some less specialized species of fish by increasing the availability of food.

An increasingly acidic ocean is thought to cause physiological stress by forcing marine animals to use more energy to regulate their body’s pH, but less is known about its indirect effects.

Seven researchers, all from the University of Adelaide in Australia, studied four fish species around two naturally occurring underwater vents of carbon dioxide — an analogue for more widespread ocean acidification — and at two other locations in a New Zealand rocky reef over three years.

They found a greater abundance of the fish’s prey at the vents and greater number of mature males with larger reproductive organs compared to the control sites. The researchers suggest the higher concentrations of carbon dioxide may actually be boosting fish reproduction.