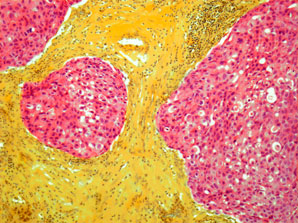 Tumours derive most of their energy by metabolizing sugar in a process called glycolysis, which healthy cells typically use only when oxygen levels are low. A team has shown that cancer cells silence a critical enzyme involved in the usual aerobic energy-producing pathway to help ensure glycolysis remains active all the time.

The team led by scientists from Tokyo Medical and Dental University found that breast cancer cells cultured for long periods in a state of reduced oxygen produced lower levels of a particular subunit of pyruvate dehydrogenase, an enzyme involved in kicking off aerobic metabolism. Levels of that subunit stayed down even after the cells returned to a normal oxygen environment, helping explain why cancers display this aberrant metabolic activity, known as the Warburg effect.

Surprisingly, however, experimentally blocking the subunit led to reduced cell progression, while elevating its expression promoted cancer growth in mice, casting doubt on the supposition that the Warburg effect always creates a favourable metabolic state for tumours.