Mantle heating at ca. 2 Ga by continental insulation: Evidence from granites and eclogites 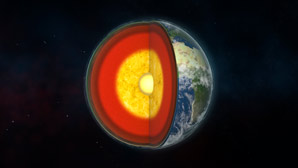 The formation of the Earth’s first supercontinent could explain the mysterious absence of rocks known as cold eclogites from the geological record between 1.8 and 1.2 billion years ago.

Cold eclogites need relatively cool conditions within the Earth to be preserved, and so provide a good indicator of the temperature in the upper mantle at that time in history. Until now, there had been no satisfactory explanation for their absence in a 600-million-year blip in the rock record.

Now, by studying the chemistry of granites around the world, four researchers from the University of Adelaide in Australia have found evidence that the formation of Nuna, the first supercontinent, could explain the cold-eclogite gap.

Nuna would have had trapped heat beneath it, increasing the mantle temperature. The researchers conjecture that this higher temperature caused cold eclogites to disappear into the mantle and hence they don’t appear in the geological record.