The answers are blowin’ in the wind: Ultra-distal ashfall zircons, indicators of Cretaceous super-eruptions in eastern Gondwana 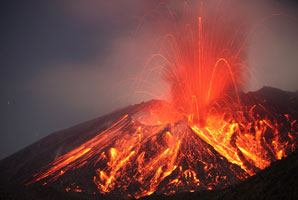 When Australia broke off the supercontinent Gondwana 106 million years ago, volcanos erupted with so much force they shot mineral crystals thousands of kilometres away, a study in Geology reports.

Curtin University researchers drilling in Western Australia discovered sand grain-sized mineral crystals that did not match the composition of local rocks. Instead, the crystals’ shape and age matched volcanic rock on Australia’s east coast, some 2,300 kilometres away.

Because the crystals were well-preserved and the same age the scientists ruled out the possibility that they were carried to the west coast incrementally by water systems. The team proposed the crystals travelled through the air, the debris ejected during a powerful volcanic eruption.

The authors say these crystals are the first evidence for volcano super-eruptions during the final stages of Australia’s separation from Gondwana. The researchers propose they occurred during the Southern Hemisphere winter when easterly winds could have pushed volcanic plumes further west.