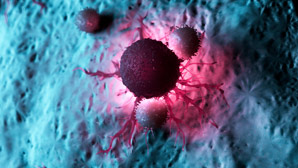 A new drug candidate that enhances anti-tumour immune responses could offer a safe and effective way to bolster the cancer-killing potential of other immunotherapeutics.

A Roche-led team engineered an antibody-like drug to activate immune cells by binding a co-stimulatory molecule called 4-1BB found on the surface of T cells.

Unlike previous drugs designed to do the same thing — therapies that ultimately failed in clinical trials owing to liver toxicity problems — the new Roche agent does not damage the liver since it contains mutations in the region that binds to liver cells.

The drug also contains a domain that binds a protein found in the supporting tissues that surround many cancers, thereby allowing for selective targeting of tumours.

In mouse models and human tissue samples, the drug improved the functionality of tumour-infiltrating T cells. And combination treatment with other immunotherapy agents eradicated aggressive tumours in mice.

A variant of this novel drug is now in early-stage human testing.