Structures of cell wall arabinosyltransferases with the anti-tuberculosis drug ethambutol 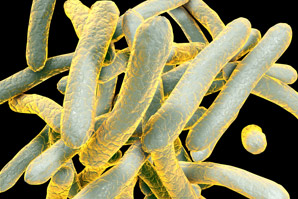 A structural analysis of how a widely prescribed anti-tuberculosis drug binds to its target could lead to the development of more-efficacious medicines.

Tuberculosis kills about 1.5 million people globally each year. The drug ethambutol has been used to treat the disease for almost six decades, but some strains of the Mycobacterium tuberculosis — the infectious bacterium responsible for tuberculosis — have become resistant to it and other anti-tuberculosis drugs. Furthermore, scientists are not exactly sure how ethambutol attacks the bacterium.

Now, a ShanghaiTech University–led team has determined the three-dimensional structures of two enzyme complexes involved in synthesizing the cell wall of M. tuberculosis.

With each complex, the researchers determined how ethambutol interacts with the enzymes. They also showed how resistance mutations found in patients who took the drug impact the molecular binding of the anti-tuberculosis agent.

The findings should allow researchers to design next-generation, ethambutol-like drugs that are less susceptible to the same resistance mechanisms.