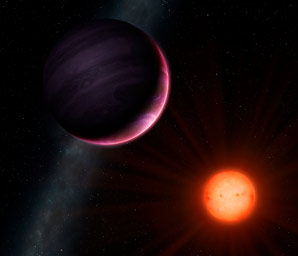 Very few giant planets have been spotted orbiting low-mass stars, so how they formed is poorly understood.

A team that included researchers from the Spanish National Research Council used a combined visible and infrared telescope to study a red dwarf star 31 light years away.

Their observations revealed that a gaseous planet with almost half the mass of Jupiter is orbiting the red dwarf, despite the star having only an eighth of the Sun’s mass. Models suggest that the planet formed when part of the dusty disk circling the red dwarf broke off in the early days of the stellar system when the star’s mass was too small to stabilize the ring.

The giant’s eccentric orbit suggests that another planet could be present, pulling on both the star and its sizeable companion.