The rise, collapse, and compaction of Mt. Mantap from the 3 September 2017 North Korean nuclear test 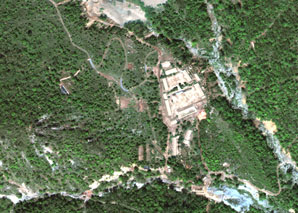 Observations from space have helped narrow down the location of North Korea’s 2017 nuclear test to within 50 metres.

Despite global agreements to prevent the proliferation of nuclear weapons, North Korea continues its nuclear testing programme and conducted its sixth weapon’s test in September 2017. The explosions were detected by an international seismic activity network, which placed the tests beneath Mount Mantap.

A team led by researchers from Nanyang Technological University have used radar imaging of the mountain to show that the explosions caused its top to sink half a metre, as well as spread out about 3.5 metres from the centre. Applying assumptions about regional rocks, the researchers combined their surface observations with the seismic energy data and calculated that the test took place 450 metres underground, and was 10 times as explosive as the Hiroshima bomb.

Spaceborne sensing could improve estimates of the location and force of covert underground nuclear tests.