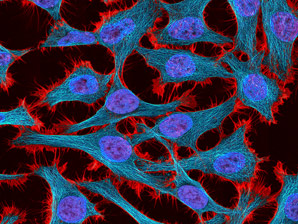 Polymer-coated diamonds that act as both tiny heaters and thermometers have been used to measure heat flow inside living cells.

The knowledge of how heat flows within and between living cells is critical for thermal diagnostic techniques and therapies, amongst other applications. But there is a gaping gulf between temperatures predicted by theoretical models and those observed in experiments. One parameter that needs to be pinned down is the heat-transporting ability (thermal conductivity) in and between cells.

Now, a team led by researchers at Osaka University in Japan has measured this parameter inside breast-cancer cells by using nanoscale diamonds coated with a heat-releasing polymer as miniature heaters and thermometers.

Surprisingly, they found that the thermal conductivity inside cells is much closer to that of oil than that of water, which is the value used in most models.